November 24, 2021   by Michael MacDonald and Sarah Smellie - THE CANADIAN PRESS

Torrential rain flooded basements and washed out roads and bridges in western Cape Breton and southwestern Newfoundland on Wednesday, as a huge storm spent a third day slowly trudging over Atlantic Canada.

A state of emergency was declared late Tuesday in Cape Breton’s Victoria County, where schools were closed and residents were warned to stay off the roads. The story was the same in Port aux Basques, the largest town in southwestern Newfoundland, where stories emerged about increasingly treacherous conditions.

Port aux Basques resident Ryan Moore was driving about 40 kilometres north of the town on Tuesday night when a section of waterlogged asphalt disintegrated beneath his pickup.

“Luckily, I got to the other side of it before it really let go,” Moore said in an interview Wednesday. “The airbags went off, so I couldn’t really see what was going on. I was just holding on, hoping for the best.” Upon closer inspection with a flashlight, Moore discovered the washout had created a four-metre deep crater that was wider than the length of his truck.

In Port aux Basques, Mayor Brian Button said the pounding rainfall had overwhelmed the sewer system and inundated the main roads, including the Trans-Canada Highway. 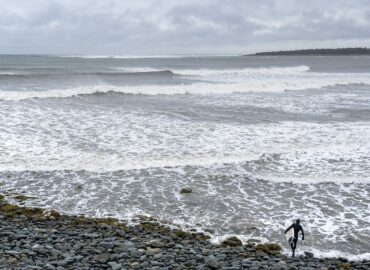 A surfer heads to the water in Cow Bay, N.S. on Tuesday, Nov. 23, 2021. Heavy rain and high winds are impacting a large swath of Atlantic Canada. THE CANADIAN PRESS/Andrew Vaughan

“You kind of feel helpless,” he said in an interview Wednesday. “There’s not a lot that you can do.”

With the main highway severed by a washout near North Branch, N.L., the community’s only other link to the rest of the island – a small, secondary highway along the southern coast – was submerged by floodwaters before noon, Button said.

“I just had someone call; they had to turn back (because) the water is coming all over the road,” he said. “We won’t be able to leave Port aux Basques to get very far.”

The coastal community of 4,000 had received about 120 millimetres of rainfall by 10 a.m. local time. The forecast was calling for a total of 200 mm or more. The town usually gets about 160 mm of rain, on average, during the entire month of November.

Southerly gusts reaching up to 110 kilometres per hour were expected north of Port aux Basques in the Wreckhouse area, which is notorious for punishing winds that pick up speed as they roll down a nearby mountain chain.

“The system is not moving a whole lot,” Bob Robichaud, a senior meteorologist with Environment Canada in Halifax, said Wednesday. “It’s just going to keep pounding them with rain, heavy at times, throughout the day.”

Meanwhile, the storm dumped between 100 mm and 150 mm of rain across large sections of Cape Breton in Nova Scotia. Communities along the east coast of Victoria County recorded more than 200 mm of steady rain.

Bruce Morrison, the county’s warden, said the storm caused extensive damage along the Cabot Trail, the world-renowned scenic highway at the northern tip of the island. Runoff from mountains in the Cape Breton Highlands damaged bridges and collapsed roads across the county, he said.

“It’s the calm after the storm, however, and that rain is supposed to come back,” Morrison said. “That’s our concern.”

Meanwhile, the Canadian Red Cross said it was providing help to 63 people forced to evacuate the Indian Garden mobile home park in Antigonish, N.S., on Tuesday. The town in northeastern Nova Scotia experienced severe flooding, which left many roads impassable.

The rain was expected to let up late Wednesday over Cape Breton, but the storm is forecast to reverse course that day and return to deliver more rain, though at a lighter pace.

“We’re not looking at a constant stream of heavy rain, like over the past few days,” Robichaud said. “There could be a few pockets of brief downpours over southeastern Cape Breton.”

– With files from Danielle Edwards in Halifax. MacDonald reported from Halifax and Smellie from St. John’s, N.L.