Former Supreme Court of Canada judge Thomas Cromwell will lead an independent review of Hockey Canada’s governance amid calls for a change of leadership of the governing body for its handling of recent allegations of sexual assault against players.

Hockey Canada said in a statement that the review will begin immediately and is expected to provide interim recommendation before its annual general meeting in November.

The review will “examine the organization and make recommendations to ensure its governance structure, systems, personnel and processes are geared to the requirements and best practices of a national sport organization of similar size, scope and influence in Canada,” according to Hockey Canada.

It will also review Hockey Canada’s use of its “National Equity Fund,” which is maintained by membership fees and used against uninsured liabilities. Until recently, that included settlements of sexual assault claims.

Cromwell sat on the Supreme Court of Canada from December 2008 to September 2016.

“An independent review so parents know where their money is being spent is better than what we have been seeing in the past,” he said. “The money goes from the associations to the provinces to Hockey Canada and the grassroots players see very little in return.” 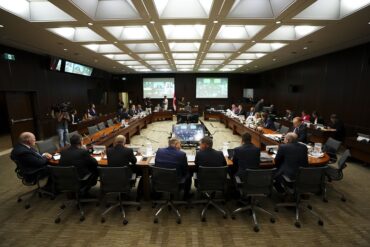 The governance review was announced by Hockey Canada in an open letter last month after news broke in May that members of the 2018 world junior team were accused of a group sexual assault after a Hockey Canada gala event in London, Ont., and that Hockey Canada reached a settlement with the complainant.

The woman who made the complaint was seeking more than $3.5 million in damages from Hockey Canada, the Canadian Hockey League and the unnamed players.

Details of the settlement are not public and none of the allegations have been proven in court.

Hockey Canada came under more scrutiny after The Canadian Press reported that it used the “National Equity Fund” to, among other things, settle claims of sexual assault.

Details of the fund, which has not been listed as part of the organization’s annual reports, are included in a July 2021 affidavit sworn by Glen McCurdie, who was then Hockey Canada’s vice-president of insurance and risk management, as part of a lawsuit launched by an injured player in Ontario

Last Wednesday, at a parliamentary hearing looking into Hockey Canada’s handling of the 2018 allegations, chief financial officer Brian Cairo testified that the organization has paid out $7.6 million in nine settlements concerning sexual assault and sexual abuse claims since 1989, with $6.8 million of that related to serial abuser Graham James.

The figure does not include the undisclosed amount of the settlement from the 2018 complaint.

Hockey Canada has since said it no longer uses the fund to settle sexual assault claims.

There was cross-partisan support for significant changes in Hockey Canada at Wednesday’s hearing, with John Nater (Conservative), Anthony Housefather (Liberal) and Peter Julian (NDP) among the MPs saying Canadians have lost trust in the current leadership.

Hockey Canada president and chief executive officer Scott Smith maintained that he believes he is the right person to continue leading the organization, but if the governance review determined otherwise he is “prepared to accept that.”