How work expectations are contributing to distracted driving

Work-related pressures may be contributing to distracted driving, but having a workplace policy in place appears to be an effective way to mitigate the risk, suggests a new survey from Travelers Canada.

The 2022 Travelers Canada Distracted Driving Risk Survey found 29% of polled Canadians say they respond to work-related calls, texts or emails while driving. However, when an employer has a policy in place, the majority (87%) of employees report they always or usually comply with it.

“This suggests that having a policy in place is an effective way to mitigate dangerous driving behaviours when it comes to work-related distractions,” Travelers Canada says in a press release last week, when the survey was released. The bad news is, only 19% of employed Canadians say their employer has an official policy about sending or receiving work-related phone calls, texts or emails while driving.

Reasons employees cite for responding to work calls, texts or emails include concerns that it might be a work emergency (44%), feeling the need to always be available (30%), and worrying that they might miss something important (28%).

Travelers Canada’s distracted driving survey was conducted in early April, in English and French, with a nationally representative sample of 1,010 Canadians aged 18-69, balanced and weighted on age, gender and region.

Paul Stone, vice president of distribution and sales at Travelers Canada, tells Canadian Underwriter companies should prioritize the development of a clear, safe driving policy that addresses distracted driving. It should apply to everyone in the organization who drives a vehicle on company business, whether it’s a delivery truck, sales vehicle or personal vehicle to run office errands. 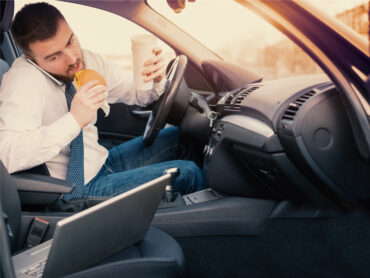 “It’s also important that employers have every employee who drives on company business acknowledge in writing that they have read, understand and will follow the policy,” Stone says, adding Travelers has a safe driving policy in place. “Employers can use emails, newsletters, bulletin board postings, driver training and signage in vehicles to reiterate the policy throughout the year.

“Effective policies put safety first and let employees know that while they are on the road, no phone call or email is more important than their safety.”

According to the survey results, half of respondents admit to talking or using a phone while driving, even though 77% acknowledge distracted driving is very risky and “they take every step possible to avoid being distracted.”

Notably, one in five drivers admit they have had a crash, collision or near-miss due to their own driving. Stone explains a near-miss has been defined as “almost had a crash or collision because the driver was personally distracted,” while crash and collision have been grouped together to encompass being in an accident with another vehicle or object. The survey also differentiates between getting into an accident due to your own distraction or another person’s distracted driving.

Drivers are more likely to correct their dangerous behaviours when passengers speak up, with 86% of respondents who use a phone while driving saying they would be less likely to do so if a passenger mentioned it. However, the likelihood of passengers saying something depends on who is behind the wheel. For example:

How can employees approach this topic, particularly with somebody like their boss?

Stone says company policies may help make it easier for employees to speak up and guide how the topic is approached. “Talk about it beforehand,” he says. “And if you’re in the passenger seat and notice the driver is engaged in distracted driving, offer to help with directions and maps.”

Men were more likely than women to report engaging in various risky driving behaviours, including taking calls, texting, or typing emails or messages (57% of male respondents say they make or receive phone calls compared to 45% of women).

Younger drivers were also twice as likely than older drivers to engage in risky behaviours, such as reading maps, taking calls and typing emails. “An alarming 70% of people aged 18 to 34 admit to reading, following directions, or looking at a map on their cell phone or another electronic device while driving, compared to only 36% of people aged 55 and over,” Stone says. “In addition, Millennials (30%) were three times more likely than drivers aged 55 to 69 (10%) to report reading a text message or email while driving.”