The property and casualty insurance industry in Canada and globally needs to improve its modelling and understanding of secondary perils, which have seen increased frequency over the past decade, says a speaker from Swiss Re during an industry event.

“We have been, as an industry, very focused on primary perils,” says Marcela Abreu, senior P&C solutions manager at Swiss Re, during the Canadian Association of Managing General Agents (CAMGA)’s inaugural 2022 conference last week. “And this is not only Canada, it’s a global perspective as well. But… secondary perils have been very active in the past 10 years.”

Abreu describes primary perils as high-severity but low-frequency events such as tropical cyclones and earthquakes. There is usually better data and modelling associated with these events.

By contrast, secondary perils are higher in frequency, but in theory have a low- to medium-sized impact. “There is a trend that is showing that that might not be the case, and that we should pay more attention to these kinds of perils,” Abreu says of the traditional view of secondary perils.

Secondary perils can also be independent, high-frequency perils such as wildfire (which can also be an effect of a primary peril). Another example is the atmospheric river flooding in British Columbia last year – the costliest severe weather event in the province’s history, with insured damage pegged at more than $515 million.

“The key differentiator is the level of sophistication, the level of comfort we as an industry feel when we compare the primary perils modelling and the secondary perils one,” Abreu says during a presentation on the impact of global trends on the Canadian MGA market. “We do need to step up our game and find more data, understand a little bit more from an underwriting perspective, [and] increase transparency to be more comfortable with secondary perils as well. 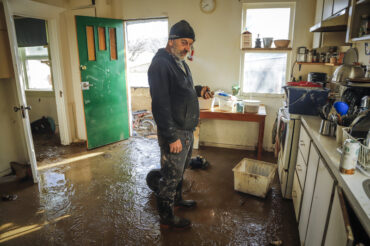 Mario Loutef cleans up after his home was flooded in Princeton, B.C., Saturday, Nov. 20, 2021.THE CANADIAN PRESS/Jeff McIntosh

Is there a reason for concern? The answer is yes and no, Abreu says.

“It’s not necessarily a concern because we can’t base our prediction of the future on a single year,” she says. “However, we do feel that yes, it’s a little bit concerning because… these types of events we’re observing worldwide and in Canada, they aren’t really having the characteristics of what we would call a ‘normal Cat.’”

Flood affects more people around the world than any other peril, Abreu adds. “We need to deepen the understanding of this risk and we need to make more active use of the modellings that are available. We need to increase the transparency in terms of data, we need to keep focusing on private and public partnerships.”

What about earthquake risk in Canada?

Generally speaking, the industry has a good understanding of the risk compared to other perils, but there does need to be more research and collaboration, says Agis Kitsikis, Swiss Re’s senior vice president and head of P&C client markets for Canada and the English Caribbean. “When there’s an event that happens, we’re going to have to adjust the model,” Kitsikis says, noting earthquake risk in Canada is pretty well understood until there is an event.

“No model is perfect,” Abreu adds. “I think that’s the challenge we have as an industry. Everyone thinks their model would work until you have an event, and then you’ll see exactly if our projected expected loss was accurate or not.”

More News
Related
Damage to reputation/brand gets social, cyber jumps higher on risk list: Aon survey
How to start a kitchen flood claim with the wave of a paw
The downside for brokers of better commercial flood mapping
Alert Ready system expands to floods, fires in B.C., not heat domes