From her home along a busy stretch of river in Vercheres, Que., on Montreal’s South Shore, she watches waves from passing ships crash into the rock wall at the base of her property, sweeping chunks away and eating into the unprotected banks from below.

The higher parts of her land, she said, are sinking an inch or two a year as they slope ever more steeply toward the river. While she’s not a scientist, she says her biggest fear is that one day there will be a landslide and the white house at the top of the hill where she’s lived for decades will tumble down.

“It could go completely,” she said in a recent interview.

Despite her age, she made the steep hike down the slope to the river, wearing a straw hat and sunglasses, with the help of a cane. At the bottom, she pointed to places where the water has carved bays into the shore since her last visit.

“This is even worse than it was,” she said. “It’s not reassuring.”

Beauchemin says the area below the wall used to be a small sandy beach where people could swim. Now, she feels the rest of the rock wall – along with the remnants of the concrete sidewalk that used to allow residents to wander from town to town – will wash away before the end of the summer. 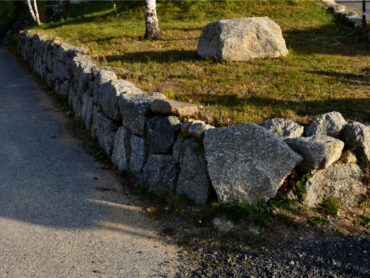 Beauchemin is part of a group of people who live in towns along Montreal’s South Shore who are urging the federal government to counter the effects of shoreline erosion that they say is affecting animals and vegetation and damaging their land.

The culprits, they say, are the waves from the large ships that pass through the narrow stretch of the St. Lawrence, eating away at rock walls and pulling cloudy swirls of soil away with each ripple.

Micheline Lagarde, the president of a committee of residents formed in 2019, pulls out old articles showing that the federal government built anti-erosion infrastructure along the river in the 1960s and 1970s.

But the federal program that funded wall maintenance was eventually scaled back and eliminated entirely in 1997. The walls, she said, have been crumbling ever since.

In an interview in her kitchen overlooking the river, Lagarde said people feel “completely abandoned” in the face of ongoing property damage.

“It’s like there’s nobody who wants to take responsibility,” she said.

Lagarde said that after years of lobbying their MPs, residents banded together to form a citizens’ committee. Since then, they’ve done more lobbying and even went to Ottawa to present a petition with 2,300 signatures and tried unsuccessfully to meet then-transport minister Marc Garneau.

Lagarde says it’s nearly impossible for homeowners to build or repair retaining walls themselves because the operation requires specialized contractors and engineers and would cost an estimated $5,000 to $6,000 per metre – meaning the bill for a whole property could hit hundreds of thousands of dollars. Even if they wanted to, she said they may not even be granted permits because the St. Lawrence River falls under provincial and federal jurisdiction.

Last week, Lagarde and fellow committee member Diane Lalonde took The Canadian Press to visit several properties in the Vercheres and nearby Contrecoeur, Que., areas. They pointed out trees and other vegetation that had been lost, chunks of land that have been swept away and concrete and rock retaining walls that have crumbled.

John Masserey’s home sits about nine metres from the water, with a lawn that is held back from the river by a nine-foot-tall metal sheet piling wall built in the 1960s.

Last week, Masserey walked along the base, pointing out rusted spots where water has begun to seep through. The wall is anchored on one side by a concrete base, about half of which has eroded, and on the other by angled rods digging into the grass.

“If they fail and the sheet pile goes, the house is no longer suitable for habitation,” he said.

Masserey raised concerns about the sheet piling almost 30 years ago, when he wrote to the federal government suggesting the action of the waves from ship traffic was degrading the base. The response from the Canadian Coast Guard in 1993 said there was no federal money for restorations.

Masserey and Beauchemin have joined a class-action lawsuit against the federal government on behalf of the residents of Varennes, Que., Vercheres and Contrecoeur. The $50-million lawsuit, which has not yet been heard on its merits, alleges the owners have experienced worsening erosion that exceeds what would occur through natural processes due to ships.

In a statement, Transport Canada said it is aware of erosion problems in the area and is following the issue with other partners.

“In order to protect the banks, funds were granted by the federal government in the 1960s to build protective structures; this program has since ended,” it wrote.

Transport Canada said it has taken steps to reduce the impact of ship-generated waves, including issuing navigation notices based on water levels, monitoring ship speed and instituting voluntary speed reduction measures that came into effect in 2000.

The department also said erosion is not only due to ships, but also to “natural factors” such as ice, wind and currents.

“As these issues are not within Transport Canada’s mandate, the department does not have a program or funding to address shoreline erosion related to these factors,” the department said, noting that responsibility for the river is shared with the province and cities.

Lagarde said she’s not opposed to the class action, but hopes the matter can be resolved amicably.

She hopes to meet with the federal environment and transport ministers about repairing the crumbling walls and to work with scientists to come up with new, environmentally friendly ways of countering erosion.

Feature image: Angelique Beauchemin looks at the erosion on her property on the shore of the St. Lawrence River, in Vercheres, Que., Monday, June 20, 2022. THE CANADIAN PRESS/Ryan Remiorz