Foreign entities operating in Canada through a branch will now have to notify the federal regulator of any potential changes to branch management “as well as any circumstances that could negatively impact their suitability,” attendees to a virtual industry event heard recently.

“Whereas the prior guideline focused on the role and accountability of the chief agent, there’s a shift now to branch management, which may include the chief agent along with senior officers located in and outside Canada,” Melanie Hoad, assistant vice president, legal counsel with CNA Insurance, said of the Office of the Superintendent of Financial Institutions (OSFI)’s revised Guideline E-4: Foreign Entities Operating in Canada on a Branch Basis.

The guideline replaces and consolidates prior guidelines E-4A and E-4B that were specific to insurers and banks respectively, Hoad said Nov. 2 during Insurance Bureau of Canada’s 21st annual Regulatory Affairs Symposium. She was speaking as part of a panel looking at numerous current and emerging regulatory and compliance issues.

“As counsel to a branch of a foreign entity, I was eagerly awaiting the revised E-4 guideline,” Hoad said, adding that the deadline for compliance is “fast approaching” in January 2022. The guideline outlines OSFI’s expectations in terms of management and administration of the Canadian business of foreign entities. “There’s an acknowledgement that the home country regulator of the foreign entity is the primary regulator and OSFI’s role is limited to the business in Canada.”

The shift to branch management oversight (which may include the chief agent along with senior officers in and outside Canada) means that branch management should be satisfied that strategies, business plans and policies are appropriate for the business in Canada. They must also comply with relevant Canadian legal and regulatory requirements, and be sufficiently knowledgeable about what those requirements are. 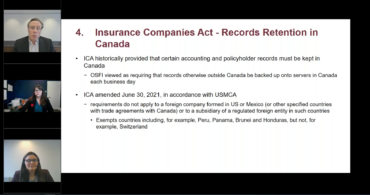 In terms of record-keeping (specifically records that are outlined in the Insurance Companies Act), OSFI expects the records to be updated and accurate as at the end of each business day and maintained locally, Hoad reported. “Where certain branches are exempt from the requirements to keep copies of the records in Canada, OSFI must have immediate direct, complete, and ongoing access to the records.”

Stuart Carruthers, a partner at Stikeman Elliott LLP, said that the Insurance Companies Act historically required certain accounting and policyholder records to be maintained in Canada, both for companies and branches. “OSFI took the view that they required that those records effectively be backed up into Canada, onto servers in Canada, at the end of every business day,” Carruthers said. “The idea being that OSFI would have access to a complete set of policyholder accounting records in Canada if OSFI had to step in to take control of a branch or a subsidiary, rather than having to try to go to a foreign jurisdiction and get access to that information.”

Those requirements in the Insurance Companies Act were amended on Canada of this year in connection with the coming into force of the free trade agreement between Canada, the United States and Mexico, Carruthers reported. “And so now those older requirements don’t apply to either a foreign branch, the head office of which is formed in U.S., Mexico or some other countries that Canada has trade agreements with, or a Canadian-appropriated subsidiary of a parent in those same jurisdictions.”

But OSFI can still require that the records are maintained in Canada if the Minister of Finance believes that Canadian national interests would require that, or if the regulator needs immediate direct, complete and ongoing access to the information.

“By way of commentary… these records retention in Canada requirements are kind of a vestige of an older paper-based records era,” Carruthers said. “In the current or future cloud computing era that we’re in, you have to wonder where our records are really located when they’re stored in the cloud. I think that’s a good topic for OSFI’s larger technology and resilience consultations that are ongoing.”