What the latest wildfire near Lytton, B.C. reveals

The out-of-control wildfire burning near Lytton, B.C. shows the community and its surrounding area are at high risk of repeated fires, said Glenn McGillivray, managing director of the Institute for Catastrophic Loss Reduction (ICLR).

The Nohomin Creek wildfire about 1.7 kilometres northwest of Lytton is estimated to be larger than 2,200 hectares as of Friday morning, according to information from BC Wildfire Service. It began on July 14, a little more than a year after the village of Lytton was about 90% destroyed on June 30, 2021. Last year’s wildfire cost insurers more than $102 million.

At this time, the Nohomin Creek fire doesn’t appear to be having a direct impact on Lytton proper, although outlying First Nations communities are seeing some impacts, McGillivray said. Media reports indicate the blaze has forced the evacuation of at least 95 people and destroyed at least 10 structures on reserves.

It’s unclear what the claims impact will be from the fire. Canadian Underwriter reached out to several claims adjusting firms but none were able to provide comment.

McGillivray noted the community is in an area that is very often hot, dry and windy (Just before the June 30, 2021 wildfire, the village set the all-time Canadian heat record for three days in a row, culminating in a high of 49.6°C). 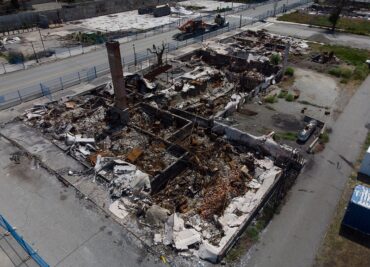 Heavy equipment used to clear debris is transported on Main Street past a hotel that was destroyed by wildfire in Lytton, B.C., on Tuesday, June 14, 2022. The fire-ravaged community of Lytton, B.C., will get $77 million from the federal government to help it rebuild a fire-resistant and energy-efficient community. Two people were killed and much of the centre of the village was destroyed when wildfire ripped through the community almost a year ago. THE CANADIAN PRESS/Darryl Dyck

“Almost every year, some of the first fires to start in B.C. begin around Lytton,” McGillvray told Canadian Underwriter. “Also, it is built on a slope, which can allow fast movement of fire upslope. What’s more, the community is surrounded by grasses which, unlike trees in the boreal forest, regenerate very quickly after fires,” meaning fire risk can return very quickly.

“The fire illustrates how important it is to build Lytton back using fire-resistant construction materials and keeping fuels away from structures,” including propane tanks and landscaping vegetation, McGillivray said. ICLR is currently working with the village’s council on requirements for such measures, McGillivray reported.

The fire began about 2 km outside of town on the other side of the Fraser River. It has remained largely in wooded fuels and while it has grown in size, it hasn’t moved quite as fast as the fire last year, McGillivray said. “The fire may or may not jump the river and put the village at direct risk.”

This fire is fairly different than the Lytton Creek fire of 2021, McGillvray added. “Last year, the fire began within the confines of town and rapidly spread through grassy fuels. The fire burned through the organic fuels quite rapidly, then moved on to inorganic human-made fuels, like buildings and vehicles.”

The latest fire also occurred after debris-removal work began for insured residents of damaged homes and businesses around the one-year anniversary of the Lytton Creek fire. Behind the scenes, there is an extremely complex claim negotiation taking place between Canada’s P&C industry and the provincial and federal governments. The aim of the protracted discussions is to ensure the village is rebuilt safely, consistently, and more fire-resistant than it was before.

To his knowledge, the latest fire hasn’t had any impact on debris removal in Lytton because widespread reconstruction hasn’t begun yet, McGillivray said. “Where it is having an impact, though, is on triggering [post-traumatic stress disorder] and other stresses on those who lost or nearly lost their homes, possessions and lives last year. This is certainly understandable.”

Feature image: BC Wildfire Service says a wildfire is spreading just west of the Village of Lytton, B.C. as shown in this Thursday July 14, 2022 handout image. It says multiple BC Wildfire Service crews are responding, and helicopters and airtankers have been dispatched. THE CANADIAN PRESS/HO-Daisy Meissner