What’s the most successful way of seeking new P&C talent?

Personal referrals were the most successful method for seeking new talent in the property and casualty insurance industry, speakers agreed during an Insurance Institute of Ontario webinar Tuesday.

An informal poll of attendees to the webinar asked which recruitment channels have proved the most successful in seeking new talent: recruiters, personal referral programs (i.e. your network), posting on employment websites, social media promotions, virtual or in-person job fairs, or none of the above.

Panellists agreed that internal referral programs were the best method for recruitment. “We find that to be the most… beneficial way of recruiting,” said Gary Anderson, CEO of Nova Mutual Insurance Company. “Folks that are working in your culture today, by referring somebody else they know, they know the attributes that… fit into that culture and say, ‘Oh, you’d be a very good fit for this,’” Anderson said. “So, when you get that, you’re pretty well guaranteed of getting at least the right culture fit.” 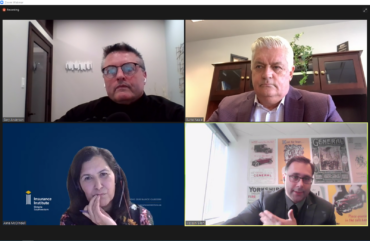 He estimated that only about one out of 20 people hired at Nova Mutual over the last few years were outside of a referral.

Hasaan Gilani, head of underwriting (AVP) with Aviva Canada, said that all of the insurer’s hires in London, Ont. in the past year have been referrals. “All of them,” he said, despite “us casting a really wide net” and indicating the potential employees could work from anywhere in Ontario, not just London.

“That’s why engagement is so important, because nobody’s going to recommend your organization if they don’t enjoy working for them,” Gilani said. “This was a huge source of pride that all of the ones in London were referrals.”

Another panellist, Burke Neale, president & CEO of McFarlan Rowlands Insurance Brokers, also found referrals an effective recruiting tool. “It’s been our internal referral program that’s brought in the most recruits,” Neale said, adding that the brokerage does use job website Indeed a bit.

“We’ve also moved a little bit away from pure insurance experience,” Neale added. “We’ve sort of gone with the attitude, ‘You can’t teach someone to care.’ So, we look for somebody that cares and [has] empathy. We can teach the insurance later.”

All speakers pointed out that their number one challenge was recruitment, noted panellist and moderator Anna McCrindell, vice president of commercial insurance with Wawanesa Mutual Insurance Company.

There are a number of major trends impacting recruitment, she said, including:

“All of these issues are impacting recruitment,” McCrindell said. “Our industry has always had to be creative in promoting and bringing new talent to insurance.”