A raging forest fire in northwestern Ontario has prompted the full evacuation of the First Nation community of Keewaywin, authorities said on Thursday.

More than 200 residents considered vulnerable had already been flown this week to Sioux Lookout, Ont., as the fire moved closer, while roughly 200 more were being sent to another city Thursday.

Joe Meekis, a former long-time chief of Keewaywin – which has about 450 residents – called the situation scary. 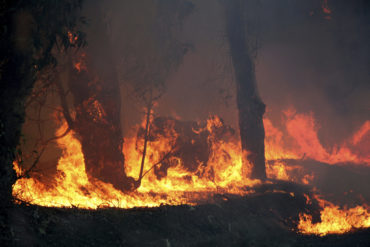 “The community is threatened,” Meekis said in an interview from Sioux Lookout. “Everybody has to get out.”

Known as Red Lake Fire Number 23, the blaze which is now about 546 square kilometres began as a small fire a week ago about 40 kilometres from the community. Earlier this week, the winds picked up and it “grew really fast,” Meekis said.

Smoke began drifting into the community, prompting residents to close windows and doors, and shut down air conditioners.

Ultimately, the chief declared an emergency and the initial transfer of babies, pregnant women, and children under five and their families began. On Tuesday and Wednesday, a total of 227 people were flown about 330 kilometres south to Sioux Lookout, which has declared its own state of emergency aimed at defraying the cost of helping the arrivals.

Volunteers in the town were helping provide access to snacks, supplies and information, as well as responding to requests from the evacuees, a spokesman said.

“All evacuees are being housed at a local hotel, and a local restaurant is providing all of the meals,” said Brian MacKinnon, the town’s manager of corporate services. “(However), Sioux Lookout is presently at capacity with respect to the number of evacuees we can host.”

As a result, the more than 200 remaining evacuees were being flown to Timmins, Ont., on Thursday, leaving just a skeleton crew in the community for security purposes, Meekis said.

By noon Thursday, the fire was 10 kilometres southwest of the Keewaywin boundary, which is 12 kilometres from the town itself, according to the provincial Ministry of Natural Resources.

Jonathan Scott, an information officer with Aviation, Forest Fire and Emergency Services, said an incident management team was on site looking for “aerial ignition opportunities” in which fires are deliberately set to take the blaze to natural barriers and slow its spread. Crews and equipment were also in the area.

Despite some isolated heavy rains Wednesday night, the fire hazard in the region ranged from low to extreme. Speaking from Dryden, Ont., Scott said 12 new smaller fires were confirmed on Wednesday near Red Lake, Fort Frances, Dryden and Sioux Lookout.

In all, more than two dozen fires are burning in northwestern Ontario, 12 out of control.

Large numbers of huge forest fires are not unusual in the region. There have been 183 to date this season, well below the 500 of last year and about half the 10-year average of 366, Scott said.

“Ontario is so stretched with their resources,” Meekis said. “There’s fires all over the place. So we have to sort of fight for the resources.”

Keewaywin’s last full evacuation occurred in 2011. While the community was spared, damage to the surrounding area was significant.