Definity Financial Corporation is interested in both P&C brokerage and carrier acquisitions, the insurer’s president and CEO Rowan Saunders confirmed during a recent virtual fireside chat with RBC Capital Markets.

“Even though we’ve just recently done a significant acquisition in the distribution area, we’re still very, very focused on insurance companies,” Saunders said. “I mean, that’s our primary focus….But equally we do like distribution.”

Saunders was referring to Definity’s partnership with Ontario-based brokerage McDougall Insurance. In October, the insurer increased its ownership interest in the brokerage from approximately 25% to 75%. McDougall Insurance represents more than 50 carriers and is one of Ontario’s largest P&C brokerages, with more than 450 employees and 40+ branches.

“You’ve seen us more recently start to deploy some excess capital, particularly with the pretty significant investment in McDougall Insurance, which I think is really strategic for us,” Saunders said. “Because it now gives us a platform to participate in the consolidation that’s happening on broker distribution.”

Saunders discussed M&A with Geoffrey Kwan, managing director of global research with RBC Capital Markets, earlier this month in advance of the one-year anniversary of Definity’s demutualization. Definity raised about $1.6 billion in its initial public stock offering, becoming the first P&C insurer to demutualize on Nov. 23, 2021. Kwan asked Saunders if Definity is more likely to do brokerage-type investments or acquisitions in the near-term as it thinks about its M&A pipeline over the next year. 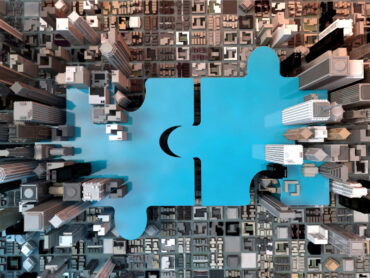 “I think that’s a fairly fair characterization of it,” Saunders said, but noted that Definity’s primary M&A focus remains on insurers. “That’s really what we’ve spent a lot of time working on — building a platform so we can be a better owner, and looking for opportunities in those areas.

“We want to grow our commercial business, particularly in the specialty areas. That will be very attractive to us. We know that our [digital broker] Vyne platform is built for a much bigger business than we are today. So, fantastic synergies there if we could find a personal lines business to put out to that platform. We’re definitely very focused and working on it, but that is opportunistic.”

However, Definity also likes the broker distribution channel for a couple of reasons. “One is, it’s a great source of complimentary income, high-margin business,” Saunders said. “And it’s access to pools of high-quality business that we could grow. So Definity really gets a benefit there on distribution income, but also access to higher-quality and large pools of business that we can underwrite.”

As a publicly traded company, “our credibility as a buyer has gone up,” Saunders said. “Also, brokers are more comfortable with us, and we’re getting more share and we can attract more talent.”

Kwan also asked Saunders about M&A valuation and whether a disconnect exists between sellers’ asking prices and bidders’ willingness to pay, and how that differs between the brokerage and insurer sides of the business.

“With the distribution side of things, the valuations are elevated but certainly fine,” Saunders responded. “For those brokers that are high-performing and can get synergies, they can get strong returns out of their investments. And so, I wouldn’t say there’s been a disconnect between buyers and sellers.

“Deals are happening, there is an active marketplace. And if you look back the last three or four years, it’s really been quite active.”

Likewise, Saunders wouldn’t characterize it as a disconnect between buyers and sellers for insurer M&A valuations. “I think it’s more about when people choose to bring their asset to marketplace.

“I look at our organization….We had no shareholders and so we had the ability to build up a significant amount of capital-retained earnings, which we then put into a massive systems modernization,” Saunders said. “I think if you don’t really lean into big technology, big modernization programs, you will find yourselves anti-selected. You’ll find yourselves less relevant to your customers and to your brokers.”