Detection and escalation costs related to data breaches were the highest in Canada and lowest in India, note findings of a new global survey released Wednesday.

“The average detection and escalation costs for Canada was US$1.60. In contrast, the average costs were US$0.53,” states 2016 Cost of Data Breach Study: Global Analysis, benchmark research sponsored by IBM and conducted by Ponemon Institute LLC.

“Data breach costs associated with detection and escalation are forensic and investigative activities, assessment and audit services, crisis team management and communications to executive management and Board of Directors,” notes the report. 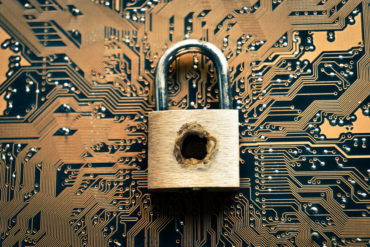 Report findings reflect responses from 383 companies in the United States, United Kingdom, Germany, Australia, France, Brazil, Japan, Italy, India, the Arabian region (United Arab Emirates and Saudi Arabia), Canada and South Africa. All participating organizations experienced a data breach ranging from approximately 3,000 to slightly more than 101,500 compromised records, defined as one that identifies the individual whose information has been lost or stolen.

Overall, the average total cost of a data breach for participating companies increased from US$3.79 million to US$4 million, the report states. As well, per capita or record cost increased 2.9%, the average size of the data breach (number of records lost or stolen) rose 3.2%, and abnormal churn (the greater than expected loss of customers in the normal course of business) grew 2.9%.

The average cost paid for each lost or stolen record containing sensitive and confidential information increased from US$154 in the 2015 report to US$158 in the 2016 report.

Data breaches cost the most in the U.S. and Germany and the least in Brazil and India, states the report, while the average total organizational cost in the U.S. was US$7.01 million and US$5.01 million in Germany. 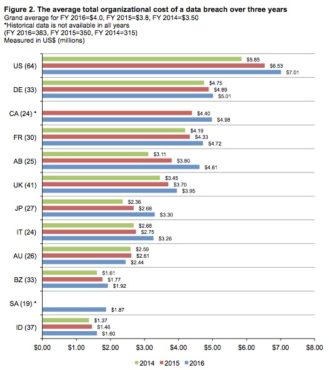 Indicators are that data breach occurrences will continue. The likelihood of a company having one or more such occurrences in the next 24 months is estimated at a 26% probability, with the breach involving 10,000 lost or stolen records, the report points out.

Organizations most likely to see a material data breach are in Brazil and South Africa, while those in Germany and Australia are least likely, the report adds.

Looking at who caused the largest portion of data breaches, that dubious distinction falls to hackers and criminal insiders. Overall, 48% of all breaches in the latest study results were caused by malicious or criminal attacks, 25% were caused by negligent employees or contractors (human factor) and 27% involve system glitches that includes both IT and business process failures.

Canada held a distinction in this respect. “Companies in the U.S. and Canada spent the most to resolve a malicious or criminal attack (US$236 and US$230 per record, respectively),” the report states.

For the second year, the study shows the “relationship between how quickly an organization can identify and contain data breach incidents and financial consequences. Both the time to identify and time to contain was highest for malicious and criminal attacks (229 and 82 days, respectively) and much lower for data breaches caused by human error (162 and 59 days, respectively).

The company’s study of data breach experience of 2,013 organizations in every industry over the years reveals the following seven megatrends: 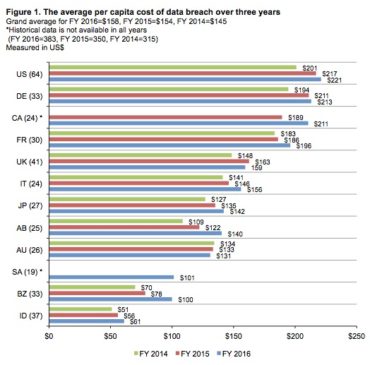 The loss of customers increased the cost of data breach, the report points out. “Certain countries had more problems retaining customers following a data breach and, therefore, had higher costs,” the report adds.