Two tornadoes that swept through the Ottawa region Sunday have prompted questions about the effectiveness of Canada’s emergency alert system.

Questions arose after numerous residents reported that they never received warnings about a tornado that hit Orléans, an east-end suburb of Ottawa. In one case, a homeowner in Orléans told CBC that her next-door neighbour got an alert on his mobile phone, but it was for Gatineau. The homeowner didn’t receive an alert; neither did neighbours across the street. One resident reported that she received the alert 15 minutes after the tornado had hit. 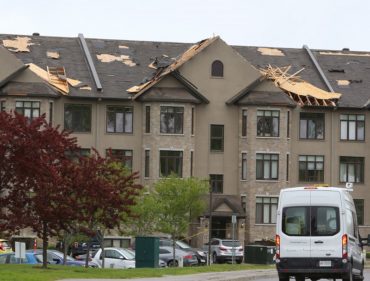 The damaged roof of a condo complex is shown, the day after a tornado touched down in the Ottawa suburb of Orleans, Ont., on Monday, June, 3, 2019. THE CANADIAN PRESS/Fred Chartrand

A spokesperson for Public Safety Canada said the federal government can’t measure how many people actually receive emergency alert message on their phones, the Canadian Press reported Wednesday. However, the “most recent test of the warning system in early May was determined to be a success.”

Even if the alerts are working correctly, there is no standard warning time before such severe weather occurs. Indeed, numerous residents posted to Twitter and Facebook that they either never got the alert message at all or, by the time they got it, the storm had already passed and it wasn’t for their area. In one video posted to Twitter, the cellphone alert can be heard going off as the tornado is passing.

“There is no typical warning for these events,” Glenn McGillivray, managing director of the Institute for Catastrophic Loss Reduction (ICLR), told Canadian Underwriter Tuesday. “Sometimes there is no warning or just a few seconds or minutes, and other times there is a half-hour or more.”

What if a broker – or even a smart home system – was able to alert a homeowner about an impending tornado? There has been discussion in the industry about brokers or insurers sending out alerts to warn clients about impending disasters.

“I believe that in the case of tornadoes, warnings should come directly from authorities and not brokers,” McGillivray said. “Too much valuable time would be wasted getting messaging to brokers, and then have them pass it along. Also, what if the tornado occurs on a weekend, evening or overnight?”

Preliminary information from Environment Canada shows that the tornado developed over Orléans just before 6 p.m. Sunday evening, tracking eastward. “Damage was reported all along the path of the tornado, particularly in Orléans, due to the high population density,” Environment Canada said in an incident summary. “Tree damage was common, and many houses had roof damage. The majority of the damage was consistent with a category EF0 tornado. However, there was some roof damage, particularly to a three-storey condominium building on Prestige Circle, which was consistent with an EF1 tornado.”

As a result, the tornado was categorized as an EF1 tornado, with maximum winds of between 150-170 km/h. There was also a report of one minor injury from the event. The second tornado appears to be an EF1, likely a landspout – a waterspout that reached land.

“It should be noted that at this time no direct link can be made between climate change and tornadic storms,” McGillivray said. “This was a weak tornado in June, another case of par for the course.”

Damage from this event would not be as widespread and substantial as with the outbreak in September 2018, McGillivray noted. That month, six tornadoes hit the National Capital Region, including one EF3 tornado (wind speeds between 225-265 km/h) in Dunrobin, Ont., west of Ottawa. Insured losses for the September 2018 tornadoes were pegged at over $300 million.