What brokerage leaders should be doing every day

Your employees may be struggling in a work-from-home environment, so it’s essential to check in with them to make sure they’re adjusting well, say brokerage leaders. Ensuring regular communication can go a long way to keeping their mental health strong.

Travis Murray is the chief operating officer of Leibel Insurance Group in Edmonton. He told Canadian Underwriter about one employee in particular who was having a hard time making the change.

“I make the point of calling this person multiple times a day just to check in, because even though they’re efficient and the job’s getting done, [the adjustment] is something they’re struggling with at the moment,” Murray said.

Murray is part of the executive team at his brokerage that includes CEO Chad Leibel and Rob Barros, chief technology officer and communications officer.

“It’s important for management to have the checks and balances in place to make sure that people are being productive at home,” Leibel added. “This may be a new role. They’re not used to this.” 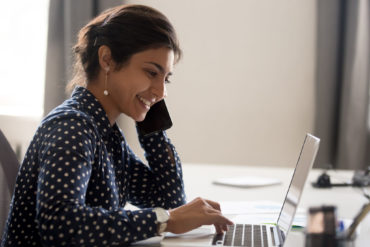 Jody Lohr, vice president of operations at Lundgren and Young in Calgary, agreed. “Honestly, the biggest success we have found out of this is engagement,” she said. ” You’ve got to keep in contact.”

Most are used to working from home once a week or a couple of times a month. “But when you’re talking weeks and potentially months, that has its own set of challenges,” Murray said.

Barros said he and the other two brokerage executives are connecting with most everyone on a daily basis either through email or phone calls. “I ask, ‘How are things going?’ and let them speak. They just want to talk. And it’s important for them to just kind of speak their minds, clear their soul, if you will, and get that reset and recharge, and continue on for the day.”

Lohr does the same with her staff. She’s regularly reaching out, particularly to those who are more introverted. “They’re like, ‘I don’t need to talk. I’m good. I’m doing my job. I’m doing my thing.’”

So she forces them into having a conversation, whether it’s having a meeting or having a group chat. “And they appreciate it after that: ‘Oh, yeah, it’s nice to engage every once in a while and check-in,’” they will say.

Video conferencing helps staff remember what everyone looks like. “I think that helps them see everybody else face to face. It helps feel like you’re not so isolated at home,” Leibel said.

It’s that feeling of isolation that can weigh the heaviest on your employees’ well-being, Murray said. “We recently held a team meeting in which we really wanted everyone to pay attention to that, because it’s something that can slowly creep up on people.”

Meetings don’t have to take place just to discuss business, Lohr noted. Just ask, “’How’s it going? How are the kids? How is your sanity right now?’” she recommended. “Just have a chat. Engagement, engagement, engagement is the biggest thing. And stay six feet away from each other!'”