Where do the most innovative ideas come from? Not your CEO 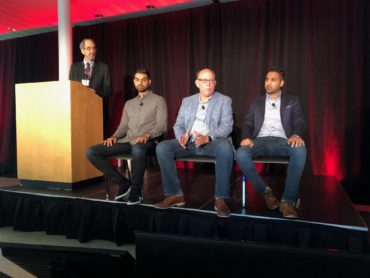 The next time you’re brainstorming the next big idea, don’t extend a meeting invite to your executives. Instead, make sure as many of your frontline staff members as possible are there.

The thing about great ideas, said Aly Dhalla, co-founder and CEO of Finaeo, a Canadian insurtech company, is that they can come from anywhere.

“If you ask most C-level executives, they’re so disconnected from the ground that their ideas are some of the worst ones ever,” he told about 120 attendees as part of a panel at the Insurance-Canada.ca Executive Forum in Toronto Aug. 28.

“The people on the ground who are dealing with the problems have the ideas you need surfaced to the top.”

It was part of an explanation he was giving on failure and accepting it when trying to find innovation for your business. What many insurance pros need to wrap their heads around is accepting that innovation comes at a cost.

“And that cost is called failure. If you’re going to get to ‘right,’ you’re going to have to go through a lot of iterations of wrong,” he said. He cited the example of a company he knew that struggled to grasp the concept of failure being part of innovation. “The quicker we can wrap our heads around that counter-intuitive point, the quicker we can start to uncover the steps involved to get from [the original] concept, to iterative execution, to what ‘right’ looks like in the mind of the customer.”

Most ideas will fail, and that’s perfectly fine, Dhalla said. When you go through the process of building, measuring, analyzing and testing, “there are probably 995 failures to get to five potential rights, and in there only one is market-ready in terms of viability. I think it’s more a mindset than it is a tactic.”

Being able to move quickly from one idea to the next is key to finding that innovative idea, said Sachin Rustagi, director of digital innovation at Gore Mutual.

“We call it ‘fail fast.’ We are actually very open to that. We have a list of things we want to do that is based on strategy, and if we fail, we pivot,” he said on the panel. “All those ideas – wherever they originate from – [when they fail], you pivot, fail, pivot, fail, pivot, and at one point you will reach a great success. So as long as you are not tied to KPIs based on each of those fails and success, you can keep on going.”

Fellow panelist Neil Mitchell, co-founder and president of risk services and insurance solutions at Player’s Health, said innovation is about encouraging curiosity. Scientists base their careers on being curious, asking questions, testing out theories and finding answers.

“If you didn’t have the word ‘failure,’ you might have the word ‘fear.’ Don’t be afraid. Don’t judge yourself based on today. It’s really not about today – today is about taking steps for tomorrow. You’re going to make some wrong steps and you’re going to back it up and move forward,” he advised. “Be curious, don’t be fearful, don’t be shy and don’t feel intimidated by asking people a lot of questions.”