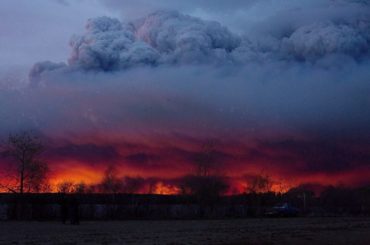 In 2016, PCS designated nine cat events in Canada (including one in the fourth quarter), up from three in 2015 and five in 2014, PCS said in its report, More Than 50 Cats: PCS Full-Year 2016 Catastrophe Review, released last week. The nine events included the unprecedented Fort McMurray wildfire, the largest wildfire event in North American history and the largest Canadian cat on record as measured by industry-wide insured loss.

The report said that over the past five years, the average insured loss from a PCS-designated cat event was $2.1 billion, brought up by the two largest event on record with PCS Canada: the 2013 $1.7 billion Alberta wind and thunderstorm event, which caused record flooding, and last year’s Fort McMurray loss (estimated at almost $4 billion by PCS). The year 2011 was also quite active, the report said, with $1.6 billion in cat losses; 2016 was almost 2.5 times higher than the average.

PCS said that six of the 2016 events that occurred in Canada were in the “wind and thunderstorm” family and resulted in industry losses of nearly $860 million in losses, second only to $3.2 billion in 2013. An event affecting Alberta, Manitoba, Ontario and Saskatchewan was the second-most severe event of 2016 at $370 million.

The Fort McMurray wildfire in Alberta was the year’s headline event, at nearly three times the size of the next-largest event on record with PCS Canada. And the nearest comparable wildfire event actually consisted of two California wildfires that occurred simultaneously in 2003, PCS reported. The “Old” and “Cedar” events led to a combined US$2 billion in insured losses, and they were two separate PCS-designated events. The Fort McMurray wildfire ultimately resulted in an estimated 34,900 claims, 63% of which were personal, the report said.

Unlike 2015, in which Alberta and Saskatchewan were the only provinces affected by PCS-designated cat events, 2016 was much broader, with events occurring in nine provinces. In 2014, PCS-designated cat events struck five provinces: Alberta, Manitoba, Ontario, Quebec and Saskatchewan. Alberta remains the province with the highest insured cat losses since the inception of PCS Canada in 2010 – $9.9 billion from 17 events.

The report further noted that as a result of the Fort Mac fire, personal losses increased dramatically year-over-year. In 2015, personal losses accounted for only 45% of the year’s industry insured loss estimate, but 71% in 2016. Auto’s share of the year’s losses reached only 8%, down from 36% the year before. Commercial losses were fairly steady at 21% (up from 19% in 2015).

PCS designated its first two cat events in Turkey in 2016, both terror-related. Large portions of Şirnak and Nusaybin were reduced to rubble due to skirmishes between the government and opposition groups, with businesses and homeowners alike sustaining losses.

PCS reported that preliminary estimates are in the works and expected in the first quarter of 2017.