After Dorian: Will Canada hit $2 billion in insured losses again this year?

Canada has already surpassed $1 billion in insured losses with nearly three months left in 2019, according to Catastrophe Indices and Quantification Inc. (CatIQ).

“Last year, insured damage from severe weather across Canada exceeded $2 billion, the fourth-highest amount of annual losses on record,” Amanda Dean, vice president, Atlantic, for the Insurance Bureau of Canada (IBC), said in a press release Friday. “That alarming trend has continued in 2019, with over $1 billion in insured losses recorded already this year.”

Asked if it looks like the industry will again see losses of $2 billion this year based on “typical” October-December weather, CatIQ didn’t want to play the role of weather forecaster. Said CatIQ managing director Laura Twidle: “Outside of immediate Cat forecasting, the prediction of losses/events for the [fourth] quarter is outside our spectrum.” 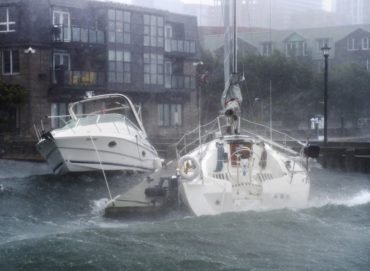 Pleasure boats take a beating along the waterfront in Halifax as hurricane Dorian approaches on Saturday, Sept. 7, 2019. A team at Memorial University says it recorded a 100-foot wave off the southwestern coast of Newfoundland during the tail end of post-tropical storm Dorian. THE CANADIAN PRESS/Andrew Vaughan

That put the industry over the $1-billion mark, which it has averaged over the past decade.

Canada’s P&C industry has now paid out more than $1-billion for catastrophe events for the past two years in a row. Glenn McGillivray, managing director at the Institute for Catastrophic Loss Reduction (ICLR), wrote in an article published in the July 2019 issue of Canadian Underwriter that “there is no indication that this trend in Cat losses will abate anytime soon. There is a sense that, given that $1-billion annual losses are no longer rarities in Canada, we may in fact be moving quickly towards $2 billion as the next ‘new normal.’”

Most (70%) of the losses were in personal property lines, followed by 25% for damage to commercial property, and the remaining amount for damage to automobiles. Late last month, independent adjusting firms told Canadian Underwriter that they saw property and water damage claims, as well as commercial losses with a business interruption component.

Dorian struck Atlantic Canada Sept. 7 as a post-tropical storm, but maintained hurricane strength when it made landfall to the southwest of Halifax, with estimated sustained winds of 155 km/h. On the morning of Sept. 8, the system hit the northeastern Gulf of St. Lawrence with strong southeasterly winds in Newfoundland. By evening, the system tracked to the northeast across Newfoundland’s Great Northern Peninsula, bringing with it wind gusts ranging from 90-157 km/h.

Due to rainwater-saturated ground and trees being in full leaf, many large trees were uprooted across Atlantic Canada, and the region experienced numerous power outages, IBC reported. Heavy rainfall also caused road washouts and flooding of homes and businesses. The Magdalen Islands in the Gulf of Saint Lawrence were severely affected as homes, cottages and boats were damaged, and trees were uprooted in several cases, and some cottages were blown off their foundations.

Although the weather system tore through Atlantic Canada Sept. 7 and 8, the cleanup lasted much longer. Halifax, Moncton and much of PEI suffered a large portion of the damage, though damage reports were widespread across Atlantic Canada. Dorian knocked out power to about 80% of homes and businesses in Nova Scotia.