With the Canadian army now finished its snow-clearing mission in St. John’s, and an eight-day state of emergency now lifted, RSA Canada’s claims team on the ground expects a slow and steady stream of claims from Newfoundland & Labrador’s record-breaking snowstorm last week.

“What we’ve seen so far is that this event is developing a little bit differently than in the historical sense of what we would think of as a catastrophe,” Karen Mican, senior vice president of claims at RSA Canada, told Canadian Underwriter Wednesday. “We haven’t really seen a surge of claims activity. 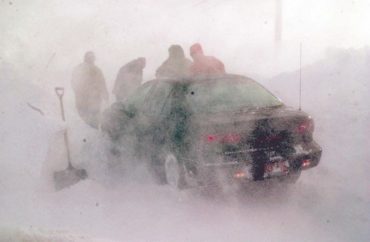 Some good samaritans brave a white-out to get a car out of a three-metre drift on the Ruby Line in St. John’s Wednesday, Jan.23, 2002. Much of eastern Newfoundland was again shut down early Wednesday as a slow-moving blizzard continued to lash the region with powerful winds and blowing snow. (CP PHOTO/St.John’s Telegram/Keith Gosse)

“We have seen a slow, steady pace of claims activity, which is understandable under the circumstances. Ultimately the claims pattern will look a little bit different than they would under a Fort McMurray, or a Hurricane Dorian, where you had a surge of claims activity all at once. Instead, we anticipate seeing sustained claims volumes over the next several weeks. It could take that long for residents and officials to dig out and assess damages in their homes and as they get to their places of business.”

Newfoundland’s historic snow storm, which RSA Canada officially classifies as a Cat event (more than $25 million in damage industry-wide), was an unusual, record-breaking mix of intense snowfall — up to 93 cm in some areas over a 24-hour period — and Category 2 hurricane-force winds, some of which peaked at 171 km/h.

“From a claims perspective, I would say we have witnessed mostly wind-related damage to roofs and sidings and, in some cases, roofs have been torn away or collapsed,” Mican reported. “As things evolved, we saw a few more water-related losses. We anticipate that trend to continue as they have had some rain there; as the snow begins to melt, the water will find its way into homes and businesses. We’re mindful of the mandatory closures of businesses and power outages caused by the storm, so we are expecting to see some business interruption-related claims as well.”

Anthony Black, RSA Canada’s national catastrophe director, said the Newfoundland storm differs in many ways from a traditional Cat event, largely because of the high volume of snow.

For one thing, it is taking longer to repair wind damage than it would for a Hurricane Dorian-style of wind event. “Typically wind claims tend to resolve quickly, but in this case, because there was so much snow load, it’s going to take some time for that snow to dissipate and for our customers to be able to clear away the snow so that things can get assessed,” Black told Canadian Underwriter. “So, from that perspective, things will go more slowly than what we would normally see under these types of circumstances.”

In one respect, at least, the snow may have actually reduced the wind losses. “I think the snow load may have saved us a little bit, too,” Black said. “With Dorian, you didn’t have any protection of the roofs, so the wind really picked up and grabbed those shingles and ripped off roofs. Whereas here, we already had snow and ice on the roofs, so to a certain degree, that protects the roof a little bit better.”

Black echoed Mican’s observation about the relative lack of demand surge, which would typically accompany a Cat event. Demand surge, as defined by the International Risk Management Institute (IRMI), refers to an increase in the cost of repair or replacement of damaged property that may occur following a large-scale disaster, when many individuals and organizations compete for a limited supply of labour and materials needed for repair.

“We’re not seeing the typical surges,” Black reported. “When you see the typical surges, that’s when you often experience increases in materials, shortage of capacity in our servicing networks, but up to this point, none of that has happened. It’s been a very – dare I say it? – clean-cut, even type of Cat. We’re not getting those extremes of volume.”

Also, the anticipated power outages were not as bad as one might expect under the circumstances, Black noted. At one point during the storm, which started on Jan. 17, about 20,000 customers had no power.

“What played to our effectiveness was that the power outages that you would normally see in a hurricane-type scenario really did not occur at the same level that we would usually see,” Black said. “At the height of this storm, there were just over 20,000 people without power, and that power seemed to be restored very quickly. That really played into the success of the response as well.”

The state of emergency allowed the company and claims vendors time to prepare, as RSA’s service teams from across the country took calls and helped customers while local bricks-and-mortar offices were snowed in.

“The way RSA is set up, all of our individuals are very agile,” said David Storey, national claims director for RSA Canada. “They don’t have to be connected to a brick-and-mortar office. We’re capable of working from anywhere. Over the weekend [during the height of the storm], we had people logged into our system assisting as the storm was developing, with claims coming in, and answering customers’ questions. So, we worked over the weekend as we prepared for the storm.”