Aon Benfield’s Tropical Storm Risk (TSR) and a research scientist at the Colorado State University (CSU) have both predicted 11 named storms, four hurricanes and two major (Category 3+) hurricanes between the months of June and November. 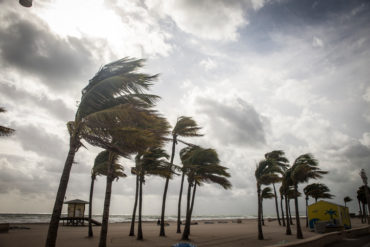 TSR, part of Aon Benfield Research’s academic and industry collaboration and Dr. Philip Klotzbach of CSU issued their forecasts for the 2017 Atlantic Hurricane Season late last week. TSR’s Professor Mark Saunders and Dr. Adam Lea’s forecast for 11 named storms, four hurricanes and two major hurricanes between June and November is a 30% reduction from TSR’s initial projection of tropical activity released in December 2016. The projected activity is expected to be 30% below both the long-range norm since 1950 and the recent 2007-2016 norm, according to an Aon Cat Alert.

TSR’s report specifies two primary factors as to why a slightly below normal hurricane season is now being forecast. The main reason is that TSR now expects a moderate El Niño to develop by the summer and/or autumn of 2017, in line with current El Niño-Southern Oscillation (ENSO) outlooks by both dynamical and statistical models. Separately, there is an anticipated suppressing effect of the July to September 2017 forecast trade winds over the Caribbean Sea and tropical North Atlantic, the alert said, meaning “increased wind shear and a resultant negative impact on cyclogenesis.” The agency stressed that atmospheric and oceanic uncertainties remain for the upcoming season, and forecast skill for sea surface temperature and trade winds at this timeframe is low.

Drs. Saunders and Lea currently project that there is a 18% probability that the 2017 Atlantic Hurricane Season ACE (accumulated cyclone energy) Index will be above-average, a 31% likelihood it will be near-normal and a 51% chance it will be below-normal.

TSR also states that if the 2017 forecast verifies, it would easily be the lowest five-year total of the ACE Index (2013-2017) since 1990-1994. “This would be equivalent to a period seen during the inactive phase of Atlantic hurricane activity between 1970 and 1994,” the alert pointed out.

With the release of his forecast, Dr. Klotzbach is predicting slightly below average tropical cyclone activity in the Atlantic Basin during the upcoming 2017 season. His report cites several factors as to why slightly decreased activity is being forecast. One of the main factors is that there remains uncertainty regarding the eventual direction of ENSO. Sea surface temperatures over the tropical Pacific have been slowly increasing since December 2016 and are currently slightly above normal, the alert noted. The statistical and dynamical forecast models continue to show a wide range of outcomes regarding whether the current ENSO-neutral conditions will transition to an official El Niño by the peak development months: August, September and October.

Much of the uncertainty is due to sea surface temperatures immediately off the west coast of South America that are currently among the warmest ever recorded, yet temperatures in the central Pacific are slightly below normal. “CSU’s best guess estimate at this time is that weak to moderate El Niño conditions will be present by the peak of the Atlantic hurricane season,” conditions that usually have a negative influence on cyclogenesis.