Aon unit pegs economic loss from Matthew at US$15 billion

Hurricane Matthew, which is estimated to have caused $150 million in economic losses in Canada alone and killed more than 600 in the Western hemisphere, set several records, Impact Forecasting LLC said in a report released Monday. 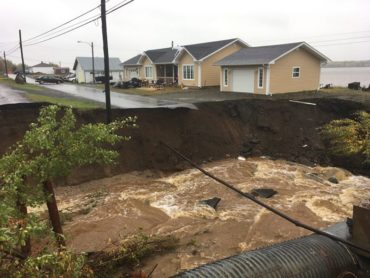 The effects of the tail end of Hurricane Matthew are shown in this images from Norris Arm, Newfoundland on Tuesday October 11, 2016. Runoff from the more than 150 mms of rain that fell caused roads in the small community to be washed away. THE CANADIAN PRESS/Paul Daly

The disaster “set many new meteorological records, and is still the most intense October Atlantic hurricane on record,” stated Impact Forecasting, a unit of London-based commercial insurance brokerage Aon plc.

There were heavy rains and “near” hurricane-force winds reported Oct. 10-11 in Atlantic Canada.

Nearly 480 mm of rain were reported in some locations in South Carolina.

The top three were Katrina, Sandy and Andrew, with US$153 billion, US$74 billion and US$46 billion respectively of economic losses and US$82 billion, US$31 billion and US$27 billion in insured losses, Aon stated. Katrina caused massive flooding in and near New Orleans in 2005. Andrew caused widespread damage in Florida in the summer of 1992 while Sandy was downgraded to tropical storm status when in made landfall about 200 kilometres south of New York City in October, 2012.

Matthew is the first hurricane to make landfall north of Georgia since Hazel (the remnants of which caused major flooding on the Humber River in west Toronto) made landfall in the fall of 1954.

Quoting from Catastrophe Indices and Quantification Inc., Impact Forecasting said insured losses in Canada were Cdn $101 million. Sydney, N.S. was among the worst affected communities, according to the report, with Brookland Elementary School being “among the numerous buildings” in Sydney to “sustain extensive damage.”

More than 5,000 claims “were filed in New Brunswick, Prince Edward Island, Newfoundland, and Nova Scotia,” most of them in Nova Scotia, Impact Forecasting added.

“In Newfoundland, the town of St. Alban’s was cut off from the surrounding area as the main bridge into the town, the Swanger Cove Bridge, was swept away by floodwaters while in Lewisporte at least 40 homes were flooded,” Impact Forecasting reported. “Across the island there were dozens of reports of road washouts, displaced culverts, and vehicle accidents, the causes of which were attributed to the inclement weather.”

There was about $10 billion in economic damages in the U.S., whose federal department’s Office of Electricity Delivery and Energy Reliability reported that about 3.15 million customer lost power. Nearly a million of those were in Florida, with 844,200 in South Carolina and 714,050 in North Carolina.

The U.S. Federal Emergency Management Agency “indicated that 71,000 individual households reported varying levels of flood damage and had applied for financial assistance,” Impact Forecasting said. “The extent of the floods far surpassed the 100-year floodplain in many areas, and some locales experienced 1,000-year flooding.”

More News
Related
Hurricane Matthew causes up to US$15 billion impact to U.S. and Caribbean economies in October: Aon Benfield
Estimated insurable losses from Louisiana floods to range between US$8.5 billion and US$11 billion: AIR Worldwide
Estimated insured losses for U.S., Caribbean from Hurricane Matthew US$2.5 billion to US$8 billion: RMS
Too early to confirm costs from flooding in B.C., Ontario, Quebec and Maritimes: Aon