FORT MCMURRAY, Alta. – On May 3, patrons at the Wood Buffalo Brewing Company on downtown Fort McMurray’s main drag had to leave their pints and plates on the table as a massive forest fire breached the city and everyone had to flee. 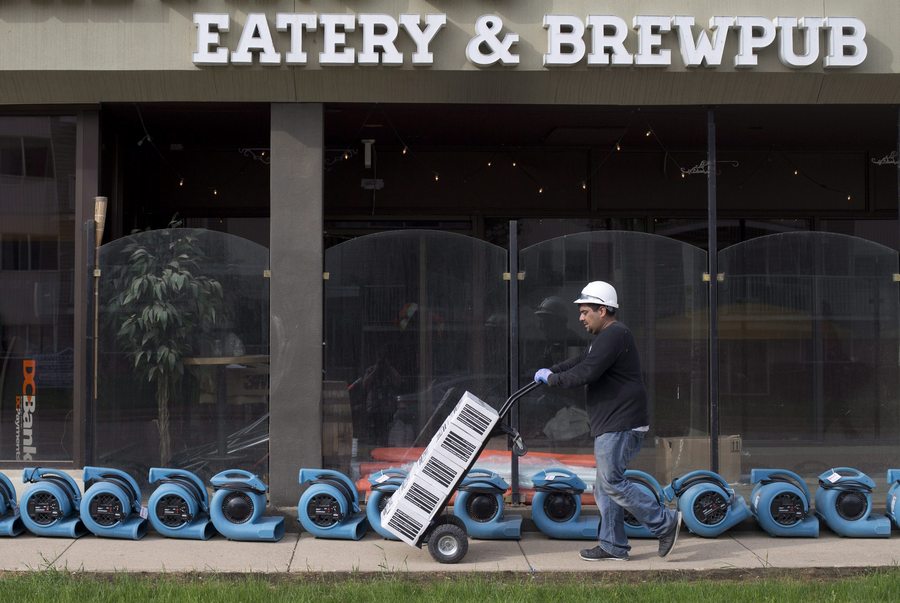 Erlin Rivera wheels supplies past fans as he works to clean a pub in Fort McMurray Alta, on Friday, June 3, 2016. Members of the community are now being allowed back into their homes. THE CANADIAN PRESS/Jason Franson

Bryan Newell, a project manager with the restoration company PuroClean, said it was an eerie scene when crews first got into the establishment to clean things up.

“It was kind of unnerving because there was food left on plates,” he said. “It was left just as it was when they evacuated.”

The company, which calls itself the “the paramedics of property damage,” had about a dozen workers on site Friday tearing into the mammoth job of getting the bar back up to snuff.

Spoiled food needed to be chucked out and dishes, utensils, pots and pans sanitized. Workers were replacing soot-damaged insulation. Beer kegs were piled out front. 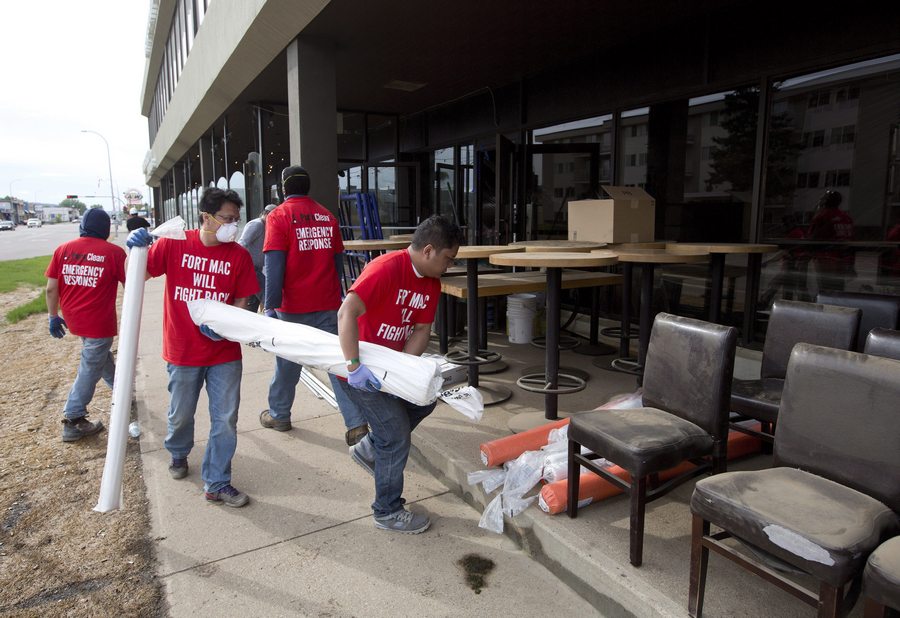 Emergency Response crews work to clean up a pub in Fort McMurray Alta, on Friday, June 3, 2016. Members of the community are now being allowed back into their homes. THE CANADIAN PRESS/Jason Franson

Once the insulation has dried in a few days, it will be painted black. Then, the plastic sheeting will come down and the whole place will get a good wipe-down.

How long until the pub is serving up pitchers again will depend on how long the boil-water advisory remains in effect, but Newell expects to hand the place back over to its owner by next Wednesday.

Eric McCrae, who own a construction business in Chilliwack, B.C., has been hired by the pub’s insurance company to make sure everything is top shape and that the final bill matches up with the work that’s being done.

He has no idea when he’ll be able to get back home as he moves from job to job in the city.

“It could be a month, a couple of months. It could be six months. I really don’t know,” he said.

“This is my ninth day and I’ve been working minimum 15 hours a day. First day was 20 hours, a long day … The only break I’m going to get is when it’s all finished.” 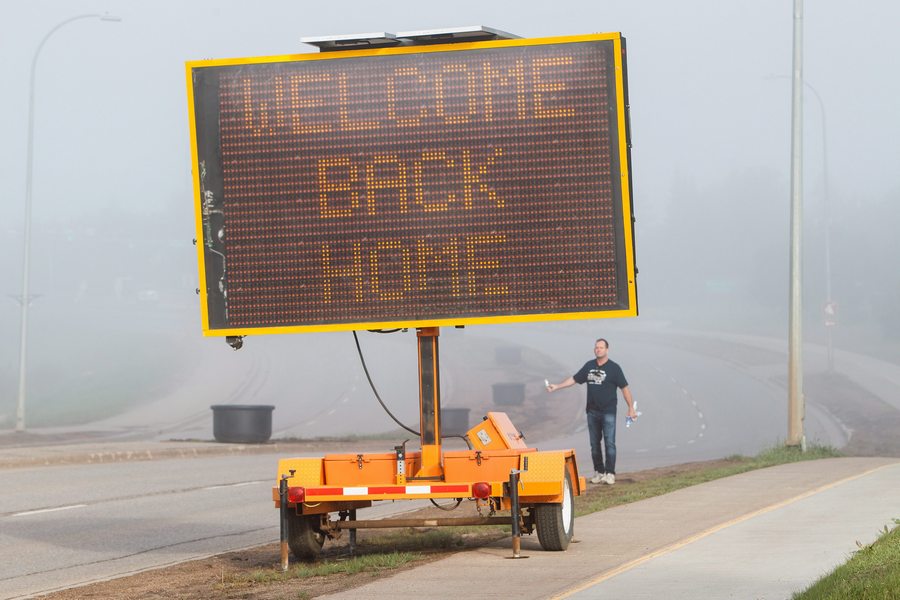 A man looks for a ride along Thickwood Blvd. as residents re-enter fire-ravaged Fort McMurray, Alta., on Thursday, June 2, 2016. THE CANADIAN PRESS/Codie McLachlan

Down the road, another restoration company was tackling the Boomtown Casino. Bright green fencing has been erected around the building.

Across from the casino, Ramona Morrison was busy getting the Smitty’s restaurant she owns back up and running.

The featured pie is pecan, according to the specials written in marker on a whiteboard. But Morrison isn’t expecting to be able to host any diners for another two weeks at least.

Someone didn't finish their meal on May 3 at this Smitty's in Fort McMurray. It's June 3. #ymmfire pic.twitter.com/auJ5odlOAv

Morrison was able to get back into her restaurant on Wednesday, when the city’s downtown re-opened.

“Everything has to be thrown out and we’ll restock from scratch on inventory and so on and getting our staff back from across Alberta and B.C.,” she said.

“I wasn’t sure what I was going to find. However, the conditions are better than I had thought.

“They’re not good, but they’re better.”

A family of nine is collecting what they can from the ruins of their #ymm home. #ymmfirehttps://t.co/8XTgdMaWU5

Assisting those affected by the Fort McMurray in Alberta, Canada. #ymmfire https://t.co/lXEuU8XX2G

This is Team Rubicon, veterans who volunteer to sift thru debris. They're looking for homeowners safe #ymmfire #ymm pic.twitter.com/29qgvD4lR2

From Tuesday to Friday at noon, the #ymm dump received 850 fridges/freezers. #ymmfire pic.twitter.com/yVPEOP4of6

A lot of fridges going on the curb in Grayling Terrace which lost power for weeks during #ymmfire #Ymm pic.twitter.com/G6E44pbF7i

Two, three, four fridges. Even those whose McMurray homes weren't lost have much to replace pic.twitter.com/kePEwZ0aLV

Fort McMurray is a city with 1 million stories (though far fewer people). Melted SUV at a burned-down airport hotel pic.twitter.com/Qu40aNYR0J

Some officials have said homes were demo'd to save more from #ymmfire appears to be some on edge of Prospect damage pic.twitter.com/mKWAx5zEcD

We're working hard to restore natural gas in #ymm and we don't charge for this service #atcoresponds #ymmstrong pic.twitter.com/3Vg9zjGxnN

Canada Post boxes: through sleet and snow and the all-consuming wildfire. pic.twitter.com/6IVFLdwdXC