Buildings evacuated after massive fire breaks out in midtown Toronto

TORONTO – Firefighters continued to pour water on a massive and “hazardous” blaze in midtown Toronto early Wednesday, several hours after the fire began and forced the evacuation of surrounding buildings. 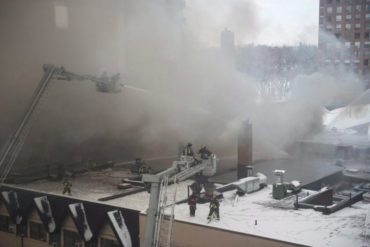 Firefighters battle a six-alarm fire at a racquet club at the intersection of Yonge St. and St.Clair Ave. West, in Toronto on Tuesday, February 14, 2017. THE CANADIAN PRESS/Christopher Katsarov

Division Cmdr. Len Stadler said the fire at The Badminton and Racquet Club was still active as midnight approached but was confined to one area of the building near the busy intersection of Yonge St. and St. Clair Ave.

Heavy excavation equipment brought to the site to knock down walls so that firefighters could get to the “seat” of the blaze were still on the scene to tear down debris.

Fire Chief Matthew Pegg said the excavator work was a “very slow operation” and that firefighters would remain on the scene through the night and into Wednesday.

“There’s a lot of structural instability … so it’s a very slow and methodical, almost arduous task. We’re going to be here all night. We’re definitely still going to be here in the morning,” Pegg said at a late-night news briefing.

Pegg also said evacuation orders put in place during the fire would remain in effect overnight and would be assessed in the morning. He said many factors need to be considering before lifting any evacuations.

“Those buildings will need to be checked for air quality. We’ve had to shut off natural gas in the area (and) most of the hydro is shut off, so all of those things are going to have to be rectified,” said Pegg.

“As we get into tomorrow (Wednesday), we should have a better idea as to when we can let people back in.”

Mayor John Tory added that people displaced by the fire should prepare for an extended evacuation.

“If they have a safe and comfortable place to stay, there should probably plan on being there for part of day tomorrow (Wednesday), perhaps all day just because it’s going to take time,” he said.

Pegg earlier said firefighters were in a defensive mode as they tried to keep the fire contained to the club, which dates back to 1924.

“We’re confident that the fire is contained,” Pegg told an afternoon news conference.

“Everyone in that building that we know that was inside that building is safe and accounted for, so that’s good news,” Pegg said.

Parts of the roof of the building collapsed sending smoke billowing over a wide area.

“The condition of the building involved in the fire continues to worsen so we’re still dealing with some very, very accelerated collapse potential, and very, very heavy fire,” he said.

Pegg called it “a very difficult and very hazardous fire fight for our crews,” adding they were concerned about the blaze spreading to neighbouring buildings, including a 14-storey, 87-unit condominium that has also been evacuated.

Toronto police Const. David Hopkinson said buses were brought in to shelter people forced to leave their homes and said subway trains are not stopping at St. Clair station due to the fire.

Pegg said it was far too early to speculate on the cause of the fire, but has said it appeared to have begun on the second floor.

“There have been a number of collapses involving that structure,” he said. “We’ve seen different segments of the walls begin to collapse and I fully expect that will continue.”

About 120 firefighters and more than 40 vehicles were on scene after being called out around 9:20 a.m.

Pegg called the six-alarm response to the blaze “uncommonly large,” saying he knew of only two other fires in the city’s history that required a similar response, one of them the Sunrise Propane explosion in 2008 that forced thousands of people from their homes.