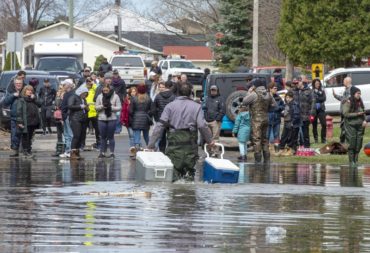 “Like 2018, no single event in 2019 caused the high amount paid out for losses,” IBC said. “Instead, Canadians and their insurers experienced significant losses from a host of smaller severe weather events from coast to coast.”

At $250 million, the Halloween storm in eastern Ontario/Quebec ranked first on a list of 2019 severe weather events. The Niagara and Montreal areas were the hardest hit, both in terms of wind and water damage, IBC reported earlier.

Hurricane Dorian in Atlantic Canada ranked fifth on the list, at $105 million. When Dorian made landfall Sept. 7 near Halifax, it had estimated sustained winds of 155 km/h.

The second-most expensive weather event, at $208 million, was the flooding affecting Quebec and New Brunswick this past April and May, IBC said Tuesday. That was caused by high spring water levels on the Ottawa and Saint John rivers.

On April 27, thousands of homes in Sainte-Marthe-sur-le-Lac, Que. were damaged when water from the Lake of Two Mountains breached a dike. Some homes in the area were flooded up to the main floor in five minutes, Michel Lacelle, vice president of organizational services in Eastern Canada for ClaimsPro/IndemniPro, told Canadian Underwriter earlier. In New Brunswick, flooding between Fredericton and Saint John resulted in dozens of road closures and hundreds of flooded homes. In Quebec, the provincial government reported more than 6,000 residences were flooded.

Aon plc ranked the floods third among the most significant events outside the U.S. in the Americas, according to its Weather, Climate & Catastrophe Insight: 2019 Annual Report, released Wednesday by Aon. Based on these floods, Aon reported economic losses of US$800 million and insured losses of US$210 million.

Topping Aon’s list (for non-U.S. Americas) was Hurricane Dorian, with US$8 billion in economic losses and US$2.5 billion in insured losses both in Canada and elsewhere.

Ranking third on CatIQ’s list of Canada’s costliest severe weather events of 2019, at $181 million, was a series of hail storms that hit Western Canada in July and August. Two winter storms, in the greater Toronto area and eastern Canada, ranked fourth at $114 million.

Ranking sixth through eighth on CatIQ’s list released Tuesday were: