LONDON – The official cause may not be known for months. The death toll is unclear – and rising. No one has said exactly where the fire started. But experts suspect recent renovations at the Grenfell Tower, including newly installed external cladding, played a tragic role in spreading the fire so quickly. 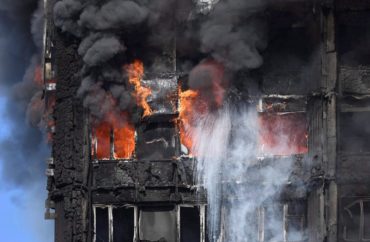 Smoke billows from a fire that has engulfed the 24-storey Grenfell Tower in west London, Wednesday June 14, 2017. Fire swept through a high-rise apartment building in west London early Wednesday, killing an unknown number of people with around 50 people being taken to hospital. (Victoria Jones/PA via AP)

A look at the photos and video of the inferno that claimed at least 17 lives shows why the cladding is a possible culprit: The flames can be seen “climbing” up the sides of the public housing building at an alarming pace, overwhelming efforts to limit the destruction.

The exterior cladding and the insulation squeezed between its panels were added as part of an extensive renovation completed last year. Matt Wrack, leader of the Fire Brigades Union, told The Associated Press that changes made during the refurbishment project seem to have left the building vulnerable to a catastrophic blaze.

“No one knows if it’s cladding or one of the other alterations,” he said. “Something clearly affected the fire protection. Cladding is clearly one of the things that has to be looked at. We need to look at what happened to cause such a major failure. How can this happen in the UK in 2017? It’s staggering. It looks to me it could have been prevented.”

He said the public has a right to know the cause. Giving urgency to the quest for answers is the fact that other buildings in Britain and throughout the world use similar materials. Britain has ordered checks at tower blocks that have had comparable renovations or are being renovated now with similar methods.

On Thursday, London Police said an investigation had been launched to determine whether the blaze involved any crimes, and Prime Minister Theresa May announced a public inquiry, a type of probe that’s used to investigate issues of major public concern.

Grenfell Tower’s residents were operating under “stay put” guidance in case of a fire under the assumption that modern fire doors would protect them in their apartments until the fire department could safely get them out. But the blaze spread too quickly up the sides of the building for that plan to work.

Wrack said the “stay put” policy is sensible – unless the integrity of the fire doors, ceilings and fire-resistant walls fail. “If it’s compromised, something else has to be done,” he said.

When the renovation was carried out, thin cladding was placed outside the tower’s existing exterior, which was made of pre-cast concrete. Architects’ plans called for the use of aluminum composite cladding, with insulation sandwiched between two panels of aluminum.

Cladding is often used because it is attractive and can be easy to clean. It gave Grenfell Tower, a 24-story mid-1970s structure, a more modern look. But it is also suspected that it made the fire harder to contain in the crucial first hour.

Cladding has played a contributing role in numerous fires worldwide, including the New Year’s Eve fire at a 63-story luxury hotel in Dubai, and other severe fires in the United Arab Emirates.

Experts also cited cladding as a factor in similar fires in which flames raced along the sides of buildings, including a high-rise fire in Shanghai in 2010 that killed at least 58 people, a 2015 apartment fire in Azerbaijan that left 16 people dead and a 2009 fire at Beijing’s TV Cultural Center that killed a firefighter.

The aluminum panels don’t cause the fires, but if they are made of flammable material – the insulation is often suspected of playing a role – it can serve to spread the flames. The risk can be reduced if less flammable material is used or if the panels are installed with fire breaks separating them at each floor.

When the panels are installed in a continuous row without fire breaks, it can provide an air space that acts like a chimney linking the bottom floors to the top. This can allow a blaze to engulf a building quickly.

The safety of cladding has been a concern in Britain since at least 2000, when a parliamentary report investigated the 1999 death of a man in a 14-story apartment block in Irvine in Scotland.

The report recommended the use of non-combustible cladding or cladding that did not pose an unacceptable risk to tenants.

Residents at Grenfell Tower had also complained about a number of other possible fire hazards in the months leading up to the fire. There were worries about exposed gas pipes in recent weeks, and also concerns about rubbish posing a fire risk and the placement of boilers and heaters.

Labour Party leader Jeremy Corbyn said the fear generated by the blaze will be felt far beyond Grenfell Tower.

He said hundreds of thousands of people living in similar tower blocks throughout Britain will be “frightened, traumatized and very, very worried” until more is known about how the blaze proved so deadly.