MONTREAL – Crews began cleaning up in Quebec on Wednesday after a suspected tornado hit one town and severe thunderstorms ripped through other parts of the province, felling century-old trees in one Montreal neighbourhood. 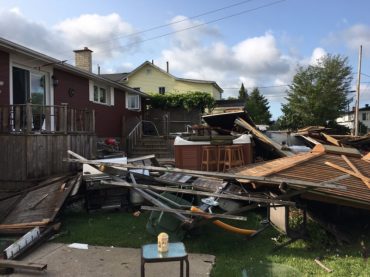 Environment Canada sent investigators to Lachute, a town 85 kilometres north of Montreal that was believed to have been struck by a tornado. Credit: @Estelle_QC.

The Montreal area and the Laurentian region north of the city were hit by the stormy weather Tuesday afternoon.

“There were several lines of thunderstorms that hit the southern part of the province,” said Environment Canada meteorologist Amelie Bertrand.

“A cold front was passing through our region and it did trigger those very powerful thunderstorms.”

Also on Wednesday, Environment Canada sent investigators to Lachute, a town 85 kilometres north of Montreal that is believed to have been struck by a tornado.

Roof ripped clean off this house. Hundreds of homes damaged by F1 tornado in #Lachute. pic.twitter.com/4TXjmTS8G6

“The debris we saw from the pictures and the video that people sent us, it does look like a tornado,” Bertrand said. “Now, we cannot say how strong it was. That’s what the team is trying to find out.”

The town said in a statement the suspected tornado struck about 6:15 p.m., affecting about 300 residences and forcing 40 people from their homes. There were no serious injuries.

NDG borough mayor Russell Copeman said the storms cut a swath through a 20-block section of the area, decimating 100-year-old trees at a popular local park.

“Where it ran through, the damage is comparable to the ice storm of 1998,” Copeman said in an interview. “It’s a much more limited area, but where this microburst hit, we have dozens and dozens of mature trees down.”

Copeman said securing streets and sidewalks will take a few days, while debris and branches in some areas can only be removed under Hydro-Quebec supervision.

“There are going to be felled branches and debris on our streets for weeks to come,” he said.

Hydro-Quebec said 115,000 customers lost power at its peak and that about 30,000 remained without electricity as of Wednesday morning.

The majority of customers were expected to be restored by the end of day as 250 crews worked around the clock, but the utility warned it could take a bit longer in some cases.

Hydro-Quebec spokesman Serge Abregel said one street in NDG saw half its trees crash to the ground as well as having four hydro poles knocked down, wires and all.

“We saw extreme wind gusts yesterday … so the damage to the network was extensive,” Abregel said.