BELLA BELLA, B.C. – Salvage crews have removed more than 23,000 litres of diesel from a sunken tug on British Columbia’s central coast in the latest effort to avert an environmental disaster near the Great Bear Rainforest. 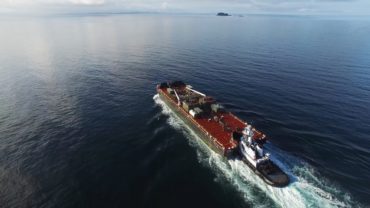 A second attempt to empty more than 200,000 litres of fuel from the Nathan E. Stewart began late Monday afternoon and continued through the night in Seaforth Channel, about 20 kilometres west of Bella Bella.

The latest joint situation report says diesel was being transferred from the ship at a rate of about 500 litres per minute with the entire operation expected to conclude sometime Wednesday morning.

About 25,000 litres of fuel was pumped out of the tug shortly after it ran aground last Thursday, but the pumps failed cutting short that salvage effort.

Once the fuel is removed the tug’s owner, Texas-based Kirby Corp., hopes to use a crane to lift it from the water and barge it out of the area.

Members of the Heiltsuk Nation, along with provincial and federal agencies have been working to contain any fuel leaks and protect sensitive shellfish beds that are vital to the local economy.

A shoreline treatment plan has been developed for Seaforth Channel and officials hoped to put it into effect after wildlife were seen within the spill area, although no oiled birds or animals have been spotted.

He appointed a minister’s observer to ensure quick action if preliminary findings from the Transportation Safety Board identify safety issues that could prevent future groundings.

Garneau also suspended the exemption that allowed the Nathan E. Stewart to operate without a pilot in Seaforth Channel, and the suspension applies to all vessels operated by Kirby Corp., the tug’s owner.

“The Nathan E. Stewart incident underlines the need for changes in the way we respond to marine pollution incidents, and that is why I am currently working on a coastal strategy to improve marine safety in a meaningful way,” Garneau said in the news release.

The Transportation Safety Board announced Monday it was gathering information and conducting interviews with crew members for its assessment of what went wrong.