Developers and property owners in Ontario’s Dufferin County are eligible for rebates if they install hurricane straps in their buildings, a county official says. 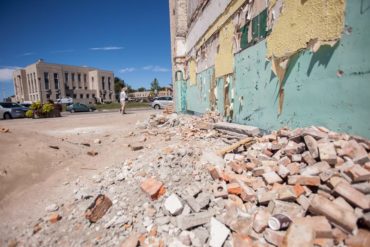 The downtown of Goderich, Ontario still shows scars on the eve of the one year anniversary of an F3 tornado which ripped through the heart of the lakeside community August 21, 2011. THE CANADIAN PRESS/ Geoff Robins

Hurricane straps, which are metal bands that wrap around trusses and connect to walls, “can largely eliminate the risk of roof failures from an EF2 tornado,” Western University engineering professor Greg Kopp stated earlier.

After a tornado touched down the community of Angus (adjacent to Canadian Forces Base Borden) in 2014, Kopp was quoted in media reports discussing hurricane straps. That caught the attention of Mike Giles, chief building official and director of facilities and property for Dufferin County.

Giles suggested to Canadian Underwriter that he met Kopp and got a tour of the wind research facilities in London, Ont.

Kopp is also research director of the Boundary Layer Wind Tunnel. Research from that facility is used by the Institute for Catastrophic Loss Reduction (ICLR), founded by Paul Kovacs, president and chief executive officer of Property and Casualty Insurance Compensation Corp. ICLR, which is affiliated with Western University, partnered with Dufferin County to offer the $4.50 rebate.

ICLR is kicking in $1.50 per hurricane clip while the county is contributing the other $3 per clip, Giles said Tuesday in an interview.

“I can’t make (hurricane straps) mandatory so I thought I would do a rebate program,” he said.

“The Ontario Building Code, for whatever reason,” has not made hurricane straps mandatory, Giles added. “It is not an expensive thing to do.”

“We have the highest elevation in southern Ontario and we are sitting between Lake Ontario and Georgian Bay and to the west of Lake Simcoe,” Giles said of the county. Dufferin County is situated southwest of Barrie, which was badly damaged by a tornado in 1985.

“I personally was involved in the 1985 tornado that went through Grand Valley and Barrie,” Giles said. “I heard a friend of mine lost a few shingles. So a buddy of mine and I, we headed out to go help him. He lost shingles all right. He lost his whole house. So that was something else.”

A total of 12 people died as a result of a system of at least seven tornadoes that moved through southern Ontario May 31, 1985, according to an ICLR paper – A Tornado Scenario for Barrie, Ontario – published in 2002. At least 16 factories were “heavily damaged or destroyed,” according to the paper written by David Etkin, Soren Brun, Solomon Chrom and Pooja Dogra.

West of Barrie, the community of Angus had about 100 homes damaged June 17, 2014, as a result of a tornado. A week later, nearby Tottenham was hit by another tornado.

The fact that hurricane straps are not mandated by the Building Code “is kind of a pet peeve of mine,” Giles suggested. Giles plans to meet next week with ICLR managing director Glenn McGillivray to plan a lunch and learn for local builders and building officials. No date has been set but the lunch and learn will probably be after Christmas, he added.