Five Canadian cats in first half of 2017 led to $438 million in insured losses: Property Claim Services

Five catastrophe events in Canada led to $438 million in insured losses in the first half of this year, according to the PCS H1 2017 Catastrophe Review, released on Wednesday. 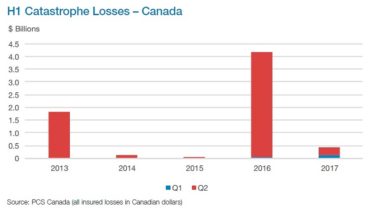 “Unsurprisingly, insured losses from PCS-designated events in Canada fell dramatically from the first half of 2016 to the first half of 2017,” Property Claim Services said in the report. “The Fort McMurray wildfire event, of course, caused last year’s loss total to skyrocket, making it the most active loss year on record for PCS Canada.”

“In the first half of 2017, insurers experienced the highest level of catastrophe frequency in the history of PCS Canada, with five events designated,” Ted Gregory, director of operations with PCS, told Canadian Underwriter. “In fact, that’s pretty close to the average full year for Canada. Ontario sustained the most catastrophe activity so far this year, mostly as a result of severe storm activity in March, April, and May.”

While the number of events this year was nearly twice the five-year average of three first-half events, the insured loss was 64% below the average for that period. Since the inception of PCS Canada in 2010, the average first-half insured loss total is $1.2 billion, pushed higher by Fort McMurray, PCS explained.

The report said that before the Fort McMurray wildfire in Alberta, the largest single cat event designated by PCS in Canada came in 2013, also in Alberta. The $1.7 billion flood event was the largest on record in the country, followed by a wind and thunderstorm event that brought significant flooding to Ontario in 2013 at $943 million.

Since the launch of PCS Canada, Alberta has sustained insured cat losses of $10 billion, making it the most affected province and representing 77% of all insured losses from PCS-designated cat events in Canada. As measured by frequency, however, Ontario has been affected most. The province is included in 53% of all cat events that PCS has designated in Canada.

“The increased frequency of catastrophe activity in Canada gives insurers and reinsurers yet another reason – following last year’s Fort McMurray event – to keep a close eye on the region,” Tom Johansmeyer, PCS assistant vice president, told Canadian Underwriter. “Should the severity of the severe storms affecting Canada begin to increase – as it has in Texas, for example – programs thought to be more remote could wind up attaching unexpectedly. While this may not impact the large retrocessional catastrophe bonds covering Canadian risk, it could have implications for loss ratios in the traditional market.” 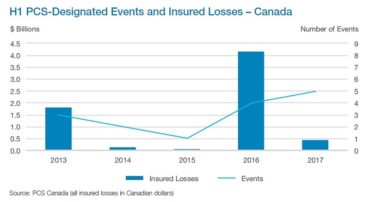 In the United States, first-half cat losses this year increased approximately 10% from the same period in 2016, according to the report. At just over US$15 billion, 2017 was the largest first half for insured losses since 2011. The number of events occurring in the first half was the most since 1980, continuing the trend of increased frequency. Although the average loss per event dropped a bit from last year, there were still four events with insured losses above US$1 billion.

With 14 events subject to resurvey, the first-half result could increase, PCS pointed out, adding that frequency was also above average – 24% higher than the ten-year average of 22 events. The first half distinguished itself in other ways as well: four events had insured losses above US$1 billion, and only three were below US$100 million.

PCS called the second quarter of 2015 “modestly active” at US$8 billion, “and once all H1 resurveys are finalized, it will likely be consistent with the ten-year average of US$9.2 billion.” Only two second-quarter U.S. cat loss totals exceeded US$10 billion in the past 10 years. In 2011, six Q2 events above US$1 billion each were largely responsible for the US$22 billion in aggregate insured cat losses and four events exceeding US$1 billion each pushed the 2012 Q2 total to US$10.8 billion. In 2014, four Q2 events of more than US$1 billion came close to an aggregate loss of US$10 billion, but fell US$400 million short.

This year, Colorado followed Texas at US$1.6 billion, with Minnesota next at US$1.1 billion. Illinois and Missouri round out the top five at US$800 million and US$740 million, respectively. In the first half of 2016, Nebraska was second after Texas, with two events causing just over US$550 million in losses, followed by Missouri (US$440 million), Arkansas (US$410 million) and Illinois (US$360 million).

In the U.S., personal losses accounted for 65% of H1 activity (approximately US$10 billion), followed by auto losses at 20% and commercial losses at 15%. “The unusually high rate of auto losses is the directed result of hailstorms in Texas,” PCS concluded. “Last year, first-half personal losses accounted for 66 per cent of first-half activity, followed by commercial at 20 per cent and vehicle at 14 per cent.”