Flood risk mitigation in Ontario could start to depend a lot more on the willingness of corporations and individuals to donate money to the conservation authorities.

“The conservation authorities are going to have to make a better case for outreach for private sources of money to fund their research than they have to date,” Blair Feltmate, head of the Intact Centre on Climate Adaptation at the University of Waterloo, said in a recent interview. He was commenting on the Ontario budget – passed into law May 29 – that cuts provincial funding to the 36 conservation authorities by about 50%. 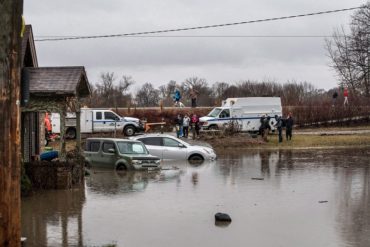 The roles of those conservation authorities include floodplain mapping, managing dams and regulating development in floodplains.

In every other province in Canada it is up to the municipalities to decide whether or not one can build on a floodplain, Feltmate said.

“In Ontario, we are in an excellent situation that they [the conservation authorities] have the degree of authority that they have to limit building on flood plains, and that discretion is not left up to municipalities,” Feltmate said.

“With the big storms that have occurred just this spring, and as lamentable as it is that people are being impacted by these storms, if the conservation authorities had not been in place, or if the discretion as to whether or not we could build on floodplains had have been left to municipalities, the flood impact in this province would have been much much greater this spring than it was. So that’s not something we want to give up.”

Many government agencies from outside Canada send people to Ontario to see how conservation authorities manage flood risk, Dwight Boyd, director of engineering for the Grand River Conservation Authority, said Wednesday in an interview. “They actually go away very envious,” he said.

Boyd described how conservation authorities help implement provincial regulations around floodplain development. “Say we have a green space along our river that is not developed, and that has been identified as floodplain,” he said. “The policy is typically, ‘No new development allowed.’” Sometimes exceptions are made – for example if critical municipal infrastructure that has to be in floodplain.

“It seems to me the conservation authorities are going to have to get a little more inventive about seeking funding to support their funding through other sources, whether that be through corporations, high-net-worth individuals, or to whomever they might have to appeal,” Feltmate said in an interview. “The value of what they are doing is almost self- evident, with all the flooding that has been going on in the last six weeks in Canada.”

Feltmate added that one cannot over-state the importance of the conservation authorities’ role in  developing floodplain maps and acting as an early warning system to bring alert to people who might be in harm’s way.

At the same time, he did not intend for his remarks to be critical of the government, he said, which is facing an increased debt load.

“They have to cut back somewhere and no matter where you cut back, somebody is going to be upset,” said Feltmate. “Unfortunately, somebody had to lose and in this case, it was the conservation authorities and the school systems and others.”

It is too early to tell exactly what impact the funding cut will have, said Ian Arthur, the New Democratic Party’s critic for environment and sustainability, in an interview. But it will have an impact, he added.

“This is the only organization in Ontario that currently has the expertise and the experience to work on flood mitigation, and it’s had its funding cut by 50%,” said Arthur, who is also MPP for Kingston and the Islands, of the conservation authorities.