Georgia’s insurance commissioner is estimating US$100 million in property damage from storms and tornadoes that devastated parts of the state and resulted in at least 15 deaths. 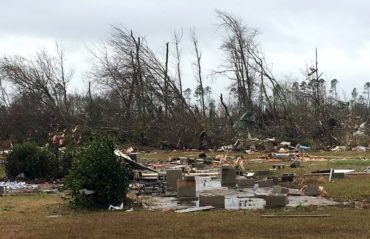 Mobile homes and vehicles lay destroyed by a possible tornado in Cook County, Ga. Residents in Georgia, Mississippi and South Carolina are trying to pick up the pieces left behind by a powerful storm system that tore across the Deep South over the weekend, killing 19 people, including 15 in south Georgia. (AP Photo/Brendan Farrington)

Commissioner Ralph T. Hudgens said in a press release issued Wednesday that “hundreds” of homes were damaged or destroyed. “Individuals in these areas have suffered devastating losses and should receive special consideration with regards to their insurance claims,” he said. “I have notified the larger insurers and expect them to first and foremost take care of the basic needs of their policyholders. This includes providing direct emergency funds for basic necessities such as food and shelter.”

Hudgens visited the counties in southern Georgia that were affected by the tornadoes and plans to dispatch specialists from the Consumer Services Division to assist survivors with their insurance needs, the release noted.

The National Weather Service rated a tornado that struck the city of Albany at least an EF-2, with winds of at least 111 to 135 miles per hour. The Associated Press reported that the storms spawned dozens of tornadoes across the southern United States, killing 20 people in Georgia, Florida and Mississippi. In Alabama, nine tornadoes struck the state several days ago – the strongest being an EF-2 that hit Choctaw County on Saturday with winds up to 120 mph – injuring four people and destroying four homes in western Alabama.

But the southern U.S. was not the only area affected by recent storms, the U.S. West was also impacted. On Monday, California Governor Edmund G. Brown Jr. declared states of emergency in about 50 counties. Brown issued two emergency proclamations to help communities respond to and recover from the severe winter storms that have caused flooding, mudslides, erosion, debris flow and damage to roads and highways, the governor said in a statement. The proclamations, which also direct the Governor’s Office of Emergency Services to provide assistance to local governments, relate to storms in December and January.

The statement said that preliminary estimates for the January storms alone are at least “tens of millions of dollars.”

My prayers go to all the families who's loved ones passed away and the ones impacted by the storm last night in south Georgia ❤️ pic.twitter.com/VbRooDEzrx

Here is the updated report from the National #Weather Service on the deadly #Tornadoes that ravaged #Georgia & #Mississippi #GAwx #MSwx pic.twitter.com/VaGIK1R9gJ