Recent severe weather in Ontario, with six inches of ice pellets and winds exceeding gale force in some areas, will most likely be a CAT event, insurance companies report.

But with rainfall warnings persisting Monday, one insurer reported more than two-thirds of claims are from water damage. 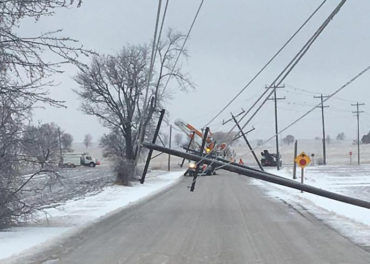 Photo courtesy of Hydro One

“This is absolutely a CAT event because of the sheer volume of claims that are coming through, likely for all insurers,” Neil Weir, vice president of claims at Gore Mutual, told Canadian Underwriter.

“We’re considering and responding to this as a CAT event,” an Aviva Canada spokesperson told Canadian Underwriter Monday.

Catastrophe Indices and Quantification Inc. defines a CAT as an event that affects multiple insurers and causes property damage losses of greater than $25 million.

“Water and rain will be the main concern from this storm – with almost 70% of claims this weekend related to water damage and just 30% related to wind,” Aviva stated.

Over the weekend, London got 14 hours of freezing rain mixed with ice pellets, with a total water equivalent of 55.1 mm, Environment Canada reported.

“The storm involved snow, ice, freezing rain, water, and wind,” Weir wrote in a statement to Canadian Underwriter. “The only peril that hasn’t happened in the last 48 hours is fire.”

Toronto only got six hours of freezing rain, but winds at Toronto Island airport reached 96 km/h at one point Sunday, Environment Canada noted.

The depth of ice pellets reached 15 cm in some areas of Hamilton. The total water equivalent at Hamilton Airport was 74.2 mm, with winds gusting to 87 km/h Sunday afternoon.

“Initially the expectation was that we would see a significant increase in claims relating to wind damage,” Aviva Canada reported. “It now appears that water and rain will be the main concern from this storm.”

An ice storm that hit Eastern Ontario and Quebec in January, 1998 led to the second most expensive natural disaster (after the 2016 Fort McMurray wildfire) in Canadian history, with inflation-adjusted losses of $2.2 billion. At the time, the total water equivalent of precipitation (mostly freezing rain) exceeded 73 mm in Kingston, 85 mm in Ottawa and 100 mm in areas south of Montreal. The ice brought down major power transmission lines. Inflation-adjusted losses from the 2013 southern Alberta floods were about $1.8 billion, A.M. Best reported last year. Canada’s fourth most insured loss (costing the industry nearly $1 billion) occurred July 8, 2013 after two thunderstorms dumped more rain on Western Toronto than the city normally gets in the entire month of July.

Toronto was hit with an ice storm Dec. 21-22, 2013, when more than 30 mm of freezing rain fell at Toronto Pearson International Airport. About 300,000 Toronto Hydro customers lost their power after tree branches came down on local power lines.