Canadian property owners can do more to “take the weak links” out of the chain of events causing homes to burn from wildfire, a speaker suggested at the recent Annual Engineering Insurance Conference (AEIC). 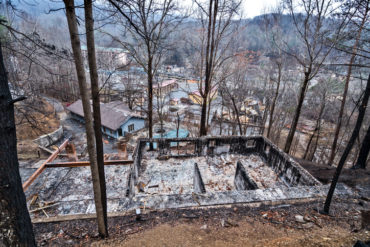 “How a property is landscaped is absolutely key to mitigating the impact of wildfire,” said Glenn McGillivray, managing director of the Institute for Catastrophic Loss Reduction.

“Half of the wildfires in Canada are started by lightning,” McGillivray said Oct. 5 during an AEIC presentation, ICLR’s Natural Hazard Research: The Next 5 Years.

McGillivray showed photos of properties rebuilt in Kelowna, British Columbia after the wildfire in 2003 and also in Fort McMurray, where a wildfire in May, 2016 caused the largest insured loss in Canadian history.

After the Fort McMurray wildfire, there were some neighbourhoods where an isolated home remained standing while neighbouring homes were reduced to piles of ash, McGillivray suggested.

“If we can prevent embers from igniting on the property, immediately around the property and catching something, we have a good chance of saving the property,” McGillivray said, noting that flammable shrubbery, wood chips and wood mulch can catch fire.

The Fort McMurray wildfire and an earlier fire affecting Slave Lake, Alta. in 2011, ranked first and fifth on a list compiled by A.M. Best Company Inc. of the most expensive P&C catastrophe losses in Canada over the past 25 years. Ranking second, third and fourth, respectively, were the 1998 Eastern Canada ice storm ($2.2 billion), the 2013 flood affecting southern Alberta ($1.8 billion) and a July, 2013 rain storm affecting the Toronto area, at $996 million. That list was presented in September at A.M. Best’s annual Insurance Market Briefing – Canada, held at the Sheraton Centre in Toronto. Fort McMurray and Slave Lake cost the industry about $4 billion and $806 million respectively, in loss and loss adjustment expenses, adjusted for inflation, A.M. Best reported at the time.

“FireSmart is the Number 1 mitigation program for wildfire in Canada,” McGillivray said Oct. 5 at AEIC.

The province of Alberta should “emphasize a long-term vision for FireSmart within the province that includes community responsibility, multi-agency collaboration and an outcome-based approach to implementing FireSmart projects,” MNP LLP recommended in A Review of the 2016 Horse River Wildfire, a report MNP prepared for the forestry division of Alberta Agriculture and Forestry and published in March, 2017.

The 2016 Alberta wildfire was a non-modelled peril at the time it occurred, Guy Carpenter and Company LLC told Canadian Underwriter earlier.

“The forest fire hazard is a modelling challenge due to a variety of influencing characteristics and conditions, such as temperature, humidity, precipitation trends, phase in the [El-Nino Southern Oscillation] cycle, winter snowpack and snowmelt rates, wind and cause of ignition,” Guy Carpenter vice president Riley Doolittle and assistant vice president Kevin Kernohan said in an earlier statement.

“There is not a rigorous way of modeling wildfire risk like we do for earthquakes or for storms,” Balz Grollimund, head of treaty underwriting for Canada and English Caribbean at Swiss Re, said April 25 at Insurance Bureau of Canada’s Financial Affairs Symposium.

Move critical infrastructure protection burden ‘on to the back’ of reinsurers: engineering conference speaker