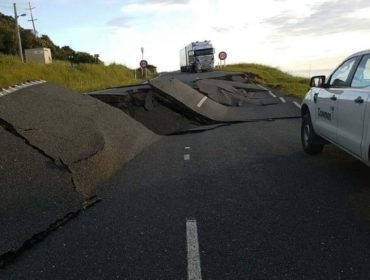 At least 250 aftershocks struck in the hours following the main tremor. Photo: @AmichaiStein1.

The U.S. Geological Survey (USGS)-registered magnitude 7.8 earthquake caused widespread damage in the North Canterbury region of the South Island, Impact Forecasting said in a cat alert on Sunday, with “shaking and varying levels of damage” additionally noted throughout the North Island, including the cities of Wellington and Auckland.

This photo really gives you a sense of the impact of the New Zealand earthquake https://t.co/PoPCefLGnn pic.twitter.com/8XaVvBQAUN

This earthquake was the strongest to strike near New Zealand since the Dusky Sound event in July 2009 (magnitude-7.8). “It also served as a reminder of the three earthquake events that struck Canterbury’s Christchurch region in September 2010, February 2011 and June 2011,” the alert said, noting that “those events combined to cause upwards of US$25 billion in economic damage.”

At least two people were killed and several others were injured as a result of the main shock and the aftershocks. Numerous other residents sustained varying levels of injuries, though several were treated for non-fatal heart attacks in the aftermath. Details on the exact number of people affected had yet to be confirmed by local authorities.

As of the writing of the cat alert on Sunday, damage reports were only slowly emerging due to blocked roads, power outages and telecommunication lines being overwhelmed by demand. “However, damage was not as catastrophic as it could have been since the earthquake was deeper than the 2010 and 2011 events, plus the epicenter was located in a less populated part of the country,” the alert said. “Despite of this fact, it is believed that several buildings across the North Canterbury Region collapsed including around the towns of Hanmer Springs, Marlborough, Waiau, Blenheim, and Kaikoura. Damage to buildings was also noted in the capital, Wellington, where officials advised people to avoid the central business district.”

My family in New Zealand just sent me some pictures of some of the roads after today's earthquake. pic.twitter.com/UHFV7uECDB

A local state of emergency was also declared for the town of Kaikoura – a popular tourist destination – but federal officials decided not to declare a national emergency “because the government believed the hardest-hit regions were able to adequately cope with the scale of the disaster,” the alert said.

Severe damage was reported to the TSB Arena and BNZ Centre on the waterfront, which were reported to be among the worst-affected buildings. Officials noted that some large buildings were showing some signs of structural stress. Images and video obtained by local media showed considerable damage to indoor contents at both residential and commercial locations. Infrastructure damage was prevalent in many areas as well, with large cracks of holes opened up in numerous roadways. Widespread power outages were reported for several portions of South Island and the southern part of North Island, the alert said.

Catastrophe modelling firm AIR Worldwide said in a press release on Sunday that the earthquake struck about 93 kilometres north-northeast of Christchurch, a city still recovering from a pair of earthquakes in late 2010 and early 2011.

Schools and businesses throughout the country are closed Monday so that buildings can be assessed for safety.

According to AIR, seismic design codes in New Zealand have set stringent requirements for new buildings and many cities have initiated a comprehensive policy to identify vulnerable pre-1976 buildings with the goal of retrofitting them. Non-engineered buildings such as unreinforced masonry structures are the most vulnerable types in this region.

New Zealand’s Earthquake Commission (EQC) covers the first $100,000 of damage to residential properties and land, and up to $20,000 for damaged contents, with private insurers covering damage beyond that level, AIR said in the release. Commercial property damage is not covered by the EQC; however, because the earthquake occurred in a sparsely populated area of New Zealand, the total insured value of commercial and industrial exposure is estimated to be relatively low.

As strong aftershocks continue to rattle the epicentral region and officials are just in the preliminary assessment phase, it is much too early to provide any financial loss estimate at this time, Impact Forecasting reported. However, the USGS has preliminarily estimated that there is a greater than 80% likelihood of economic damage exceeding US$100 million, the alert said. The specific breakout is as follows: US$100 million to $1 billion (34%); US$1-10 billion (32%); US$10 billion or greater (16%). Economic losses are likely to equal less than 1% of New Zealand’s GDP.

Look at this: Three cows stranded on a piece of grass ripped away by #NewZealand #earthquake #nzearthquake pic.twitter.com/dKZVyVdcs1

Hoping for the best for these guys #nzearthquake #cows #stranded pic.twitter.com/GrPEuuPQMC

More pics from area between Kaikoura and Blenheim. Fault lines right across the road. Near Bluff Station. #eqnz pic.twitter.com/URs3PqVbRU

More News
Related
Powerful aftershocks, some as high as magnitude-6.5, strike New Zealand after original M7.8 earthquake: AIR
Insured losses of New Zealand quake could be as much as US$3.5 billion: AIR Worldwide
Stilling quake risk in eastern Canada demands greater focus, awareness and effort: Swiss Re
Insured losses from latest Mexico earthquake not expected to exceed US$1.2 billion: RMS