Louvre reopens after flooding, as cost of rain damage mounts

PARIS – The Louvre and the Orsay, the premier museums of Paris, have reopened after an emergency closure last week to move masterpieces to higher ground during the city’s worst flooding in decades. 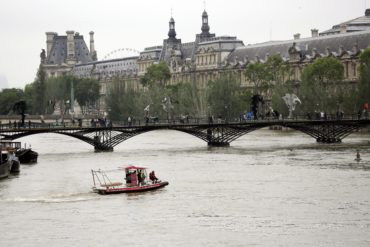 With the Louvre museum in the background, Firemen patrol the flooding Seine river in Paris, France Friday June 3, 2016. Both the Louvre and Orsay museums were closed as the Seine, which officials said was at its highest level in nearly 35 years, was expected to peak sometime later Friday. (AP Photo/Jerome Delay)

Visitors lined up to see the Mona Lisa and other famed works in the Louvre after Wednesday’s reopening. Louvre officials moved 35,000 artworks from storage areas and low-lying exhibition areas of the riverside museum as the Seine River rose last week.

Also Wednesday, France’s Cabinet formally declared a “natural disaster” in 782 towns and villages considered as the most affected by the flooding that has hit Paris and France’s central regions.

The procedure aims at helping residents and businesses to get financial help more quickly.

Flooding around Europe has killed at least 19 people, including a 77-year-old man who drowned in his car Tuesday in northern France.

We are so happy to see you again in the Louvre rooms. Enjoy your visit! pic.twitter.com/J8B0DnBpVV

#Louvre to reopen Wednesday after shutting its doors for 4 days at height of #parisflood. Closure cost the museum $1.7M in unsold tickets.