The early May windstorm that struck Ontario and parts of Quebec topped $410 million, the costliest insured event since the 2013 Toronto floods, Catastrophe Indices and Quantification Inc. (CatIQ) said Friday.

The majority of the damage from the windstorm – $380 million – was in Ontario, CatIQ said, making it the most expensive for insurers since the 2013 flooding in Toronto, which cost nearly $1 billion in damage. 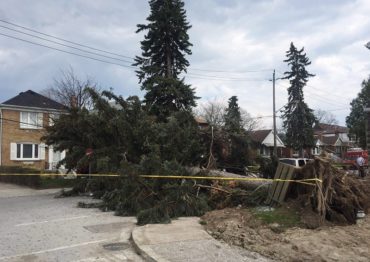 A fallen tree lays lays across a road after a windstorm in Toronto on Saturday, May 5, 2018. Environment Canada said wind gusted at close to 120 kilometres per hour on Friday in the wake of a cold front that moved across Ontario and Quebec.THE CANADIAN PRESS/Chris Young

The Canadian Press reported at the time that more than 80,000 of Hydro One and about 10,000 Toronto Hydro customers were without power. Hurricane-force wind gusts of up to 150 km/h reportedly struck parts of Ontario, including up to 120 km/h in Toronto. To be classified as a Category 1 hurricane under the Saffir-Simpson scale, a tropical cyclone must have maximum sustained winds of between 119 km/h and 153 km/h.

“It has been quite a damaging year so far,” said Kim Donaldson, vice president, Ontario, with Insurance Bureau of Canada (IBC). “This year alone insurers have already paid out three-quarters of a billion dollars, just five months into 2018.”

The last few months in Ontario have brought a series of severe, and unique, weather events. So far in 2018, the following storms have hit Ontario:

The numbers above are just the insured losses associated with these natural catastrophes and not the costs to governments, which have been “growing at an even faster rate, CatIQ noted.

Said Donaldson: “Insured losses from extreme weather storms have been increasing rapidly. However this is only part of the picture. Taxpayers are bearing the brunt of the costs that are not covered by insurance. Consumers are witnessing more frequent, intense storms, which we now know are attributable to climate change.”