Munich Re released Tuesday a report from its NatCatSERVICE database on natural catastrophe activity and losses for the first half of 2017.

The costliest event, measured by insured losses of $1.8 billion, was a hailstorm and severe storm May 8 through 11 in the United States, Munich Re stated in a release, quoting Verisk Analytics Inc.’s Property Claim Services unit. All figures are in U.S. currency. 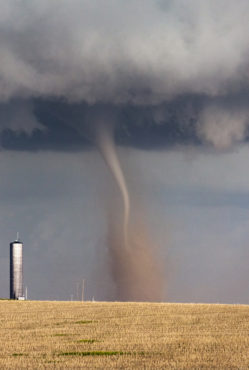 “Thunderstorms in the USA were responsible for three of the world’s five costliest loss events in the first half of the year,” each causing economic losses of more than $2 billion, Munich Re said.

The total economic loss from these storms was $18.5 billion, of which $13.5 billion was insured, Munich  Re added.

Ranking fourth, with insured losses of $1.4 billion, was Cyclone Debbie, Munich re noted.

Ranking fifth was a tornado and severe storm in the U.S. Feb. 28 through March 3, Munich Re said, with overall losses of $1.9 billion and insured losses of $1.4 billion, attributing the insured loss figure to PCS.

Munich Re said its NatCatSERVICE database recorded 350 “loss-relevant natural catastrophes” during the first six months of 2017, compared to 390 during the same period in 2016.

The deadliest event was a flash flood and landslide in Columbia April 1 that claimed 329 lives, while 264 died from heat waves in India April through June. In Sri Lanka, 212 deaths were recorded from a flood and landslide May 24 through 31, while 191 died in Afghanistan from an avalanche Feb. 4 through 7. The fifth deadliest natural catastrophe in Munich Re’s database, for the first six months, was a landslide in Bangladesh, with 164 deaths recorded June 13 through 18.