Private insurers in New Zealand have paid out almost NZ$19 billion to settle commercial and residential claims since the Canterbury earthquakes in 2010 and 2011, the Insurance Council of New Zealand (ICNZ) announced Tuesday. 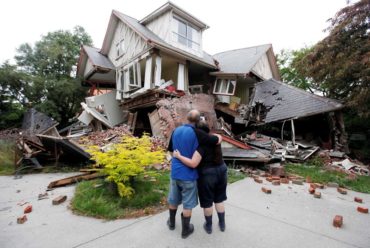 FILE – In this Feb. 23, 2011 file photo Murray, left, and Kelly James look at their destroyed house in central Christchurch, New Zealand, a day after a deadly earthquake. In many ways, the city remains a mess, a testament of the fury unleashed by the magnitude-6.1 temblor. The business district is a giant construction site. Thousands of homeowners have been told to leave their land after the government deemed entire neighborhoods too unstable to repopulate. And significant aftershocks continue to jolt people’s confidence. (AP Photo/Mark Baker, File)

Of that total, almost NZ$9 billion was for domestic claims.

To date, insurers have “fully settled 94% of all Canterbury earthquake residential properties,” representing 21,859 over cap and 63,739 out of scope properties, ICNZ chief executive Tim Grafton says in a council statement. 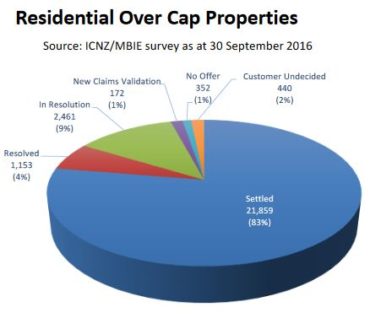 Insurers have also settled 95% of commercial claims worth NZ$9.9 billion as of the end of September, Grafton continues.

Properties still to be completed and customers still to receive offers from their private insurer is down to 352, there are 440 properties where people have yet to make decisions on the offers they have received, and 172 new claims being validated.

Based on data jointly collected by ICNZ and New Zealand’s Ministry of Business, Innovation and Employment (MBIE), 87% of all over cap residential claims are resolved – the repair/rebuild is under construction, in consenting or a building contract has been signed – or have been fully settled. An additional 9% of the 26,437 over cap properties are in resolution (rebuild/repair is in the pricing and design process or cash settlement is pending).

Insurers have completed 6,448 major repairs and rebuilds and cash settled 15,411 properties as of the end of September.