A wildfire in Nova Scotia’s Annapolis County has grown to about 240 hectares as weather continues to create “challenging conditions” for crews on site. 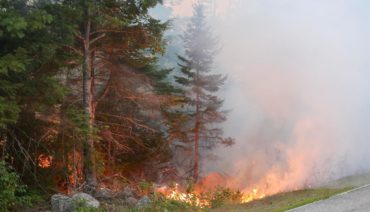 The fire burns along a road in the Maitland Bridge area in Annapolis County. Photo: Government of Nova Scotia.

The fire at Seven Mile Lake in Annapolis County, along with the Perch Lake fire in Pictou County, were not fully contained, with the latter at a size of about 10 hectares at 80% contained, Nova Scotia’s Department of Natural Resources said in a wildfire update statement issued at 11 a.m. on Tuesday.

“Conditions are extremely dry in many areas,” the department said. “In fact, some regions have not been this dry in 15 years.”

Beginning at noon on Aug. 9, all travel and activities within the woods is restricted, Natural Resources Minister Lloyd Hines announced in a release on Monday. This includes hiking, camping, fishing and the use of off-highway vehicles, as well as forestry, mining and any commercial activity on Crown land. People can still access beaches and provincial parks, but trail systems will be restricted, the release said.

“We recognize these restrictions pose an inconvenience for Nova Scotians and visitors, however, our top priority has to be safety,” Hines said. “These restrictions are being put in place to reduce the risk of additional fires.”

Traffic on Hwy 105 outside of Glendale down to one lane in both directions due to truck fire (Photo: Lauren Cormier) pic.twitter.com/Rd5qCopsNS