Canada’s new $1.5 billion national Oceans Protection Plan involves a raft of measures to help protect the country’s marine environment, including a pollution-pay approach with regard to abandoned, derelict and wrecked vessels 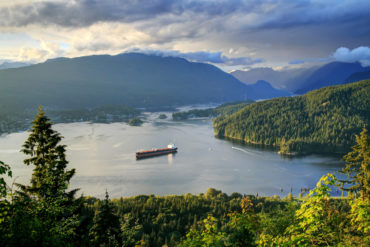 Specific measures are planned for the West, the East and the Arctic.

The plan will allow for better, quicker and more effective response to marine spills and incidents along Canada’s coasts and major waterways, notes a joint statement from the fisheries and oceans, transport and environment departments.

“In addition, preventative measures will help ensure marine spills and incidents do not happen in the first place,” Garneau says in the press release.

Among the many measures in the Oceans Protection Plan is the federal government’s commitment to address risks associated with abandoned, derelict and wrecked vessels.

Acknowledging that most vessel owners properly dispose of their property, Ottawa, nonetheless, “recognizes the risks that abandoned, derelict and wrecked vessels pose to safe navigation, the marine environment, public health and local economies.”

In response, it has developed a comprehensive plan focusing on prevention and removal, including a robust, polluter-pay approach for future vessel clean-up.

Specifically, the plan will do the following:

The polluter-pays will be further strengthened by amending the Canadian Ship-source Oil Pollution Fund to ensure adequate industry-funded compensation is available for those affected by oil spills, notes a government backgrounder.

In addition, the Oceans Protection Plan will set “tougher requirements on industry to provide quicker action for any spills from a ship,” it adds.

With regard to the Canadian Coast Guard (CCG), the plan’s measures include increasing towing capacity by leasing two large vessels capable of towing commercial vessels and large container ships, as well as installing towing kits on CCG major vessels to improve capacity to take swift action to avoid disasters.

The plan further calls for, among other things, the following:

The plan “will strengthen Canada’s Coast Guard to better serve Atlantic Canadians, while investing in better science to inform our decision-making and getting the right regulations in place to protect our precious coastlines and waterways for future generations,” LeBlanc maintains.

“Moving forward, Canada will be better equipped, better regulated and better prepared to protect marine environment and coastal communities, achieving a world-leading marine safety system,” notes the government statement. “These new measures will contribute to Canadians and to growing the middle-class.”

The Oceans Protection Plan “will support good jobs for middle-class Atlantic Canadians, help us better fulfill our environmental protection responsibilities to Canadians, advance our science, and keep our waters and wildlife safe for generations to come,” McKenna adds.