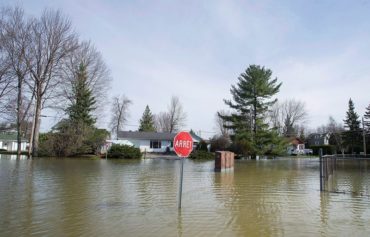 A flooded street is shown in the town of Rigaud, Que., west of Montreal, Sunday, April 23, 2017, following flooding in the region. THE CANADIAN PRESS/Graham Hughes

Numerous Quebec municipalities that border streams and rivers are dealing with floods as heavy precipitation and mild temperatures have caused water levels to rise rapidly.

Martin Coiteux took stock of the situation in Shawinigan, Que., about halfway between Montreal and Quebec City.

“I understand the situation, it’s not fun,” Coiteux said. “But we have to ask citizens to be a bit patient, because I think the next few days are not going to be days when things are going to improve right away.”

Heavy rain and spring run-off have also caused some roads to wash away and sinkholes to form across the province.

Early Tuesday, two Quebec provincial police officers were injured when their patrol car fell into a sinkhole about a metre deep on a rural road in Ste-Genevieve-de-Batiscan, in central Quebec.

The 2017 flooding doesn’t match records set in 1974, but the situation remains exceptional and is expected to require close surveillance for at least another week, Coiteux said.

ch de la Pointe-Séguin in Rigaud. Residents+officials fear water could rise back to levels of the last flood. pic.twitter.com/YuZJZkOlk8

Two particularly hard-hit areas are Gatineau and Rigaud, just west of Montreal near the Ontario border.

Rigaud Mayor Hans Gruenwald said he fears the worst and urged residents to reinforce rather than remove the sandbags protecting their homes.

Rigaud was under a state of emergency earlier this spring due to flooding from the Ottawa River and the water has risen again by 10 centimetres or more in some areas since Monday.

“We are very worried by the volume of water we will be receiving in the next 24 to 36 hours,” Gruenwald told a news conference.

He said an additional 6,000 additional sandbags have been ordered for the flood-stricken town.

According to the public security ministry, flood waters in Rigaud could start to recede as early as tomorrow. But can't be certain. pic.twitter.com/RQpmvg22pM

Gruenwald said residents should voluntarily leave their homes if roads become impassable due to flooding.

The town has resources ready to help displaced residents.

A shuttle service is available for areas that can no longer be reached by car because of water accumulation of between 30 and 80 centimetres, Gruenwald added.

Coiteux says civil security officials in various parts of the province have the situation under control and doesn’t believe the province needs the help of Canadian Forces personnel.

He also added that homeowners dealing with flooding will benefit from emergency funding from the province.

More News
Related
Quebec says high water levels across province to peak by Wednesday
Too early to confirm costs from flooding in B.C., Ontario, Quebec and Maritimes: Aon
More than 220 evacuated from homes after Gatineau flooding
Spring flooding in Ontario and Quebec caused more than $223 million in insured damage: CatIQ