Brokers in British Columbia looking to place overland flood cover should review a recent study that found polled respondents did not have access to overland flood insurance, did not know about it, or found it unaffordable.

Even more alarming, most respondents commented on only wildfire events; they chose not to comment on overland flood risk, possibly presenting brokers an opportunity to educate consumers about this risk.

The online engagement survey was included as part of an independent review of the 2017 flood and wildfire seasons in the province, Addressing the New Normal: 21st Century Disaster Management in British Columbia. It found that nearly one-third of respondents indicated they do not have access to insurance for overland flooding, while one-fifth of respondents did not know about their ability to access such insurance. Approximately one-tenth of respondents identified insurance as being unaffordable. 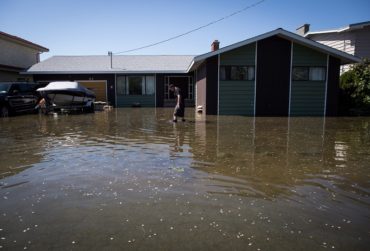 Steve Tye, of Surrey, B.C., walks through his flooded front yard after checking on the level of water being pumped out of the crawl space at his summer home, in Osoyoos, B.C., on Sunday, May 13, 2018. The Regional District of Kootenay Boundary says about 3,000 residents remain on evacuation order due to the ongoing threat of a second flood, with high forecasted temperatures expected melt snow at higher elevations. THE CANADIAN PRESS/Darryl Dyck

The provincial government said it was reviewing the 108 recommendations contained in the report, released May 10. While the majority of recommendations are long-term in nature and may require legislative changes or involve other levels of government, 19 of them are already being implemented, Emergency Management BC reported. Among the government initiatives underway are wildfire prevention and wildfire risk reduction around communities, and mitigation and preparedness programming related to flooding and seismic risks.

When asked about improvements to communication around flooding, the comments from two-thirds of respondents related to tools. “The majority of these responses indicated a desire for more direct contact, and more social media and web-based information,” the report said. “Many suggested more face-to-face or door-to-door communication to better reach the elderly and those without web access or knowledge. Numerous respondents also felt there was a lack of consistency between and among sources of information, which heightened confusion, distrust and stress.”

More than one-third of respondents felt they received unclear directions and information regarding wildfire evacuation. One-quarter of respondents cited difficulty with logistics, with recurrent mentions of particular difficulty finding lodging/accommodations for pets. As with flood respondents, many wildfire respondents also had physical difficulties with the evacuation process.