KANSAS CITY, Mo. – The winds fueling deadly wildfires that scorched vast swathes of land in four Plains states finally dropped Thursday, bringing hope to crews trying to contain the blazes. Emergency personnel warned, however, that extremely dry conditions and hot spots could cause a flare-up, even in areas where there’s “not much left to burn.” 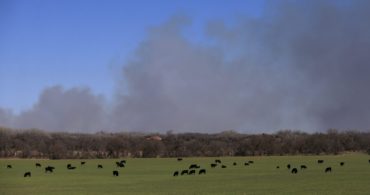 Cattle graze with a background of smoke from wildfires near Hutchinson, Kan., Tuesday, March 7, 2017. Fires raged in parts of Kansas, Oklahoma, Texas and Colorado, and warnings that conditions were ripe were issued for Iowa, Missouri and Nebraska. The fire warning came after powerful thunderstorms moved through the middle of the country overnight, spawning dozens of suspected tornadoes, according to the National Weather Service.(AP Photo/Orlin Wagner)

Most of the burned land is in Kansas, where about 2,000 firefighters have been battling a series of blazes that consumed about 1,000 square miles and damaged or destroyed dozens of structures. The firefight Thursday was focused on four counties, down from 21 on Monday.

One blaze, encompassing two counties along Kansas’ southern border with Oklahoma, is the largest wildfire on record in Kansas. Emergency officials said Thursday that crews are monitoring hot spots after the fire was 70 per cent contained in Comanche County and 50 per cent in Clark County.

Monitoring is crucial because the ground is “extremely dry,” and it was possible that sparks from a smouldering stump could re-ignite the fire, said John Lehman, the emergency manager in Comanche County, where 234 square miles has burned.

“I guess you kind of feel that things are against you,” he said.

From a viewer: photo of the fire in Clark County last night. #Kansas #KansasFires pic.twitter.com/hEVg69PpFR

“It doesn’t take anything to get a fire going and they’re hard to put down. It’s just so dry,” Lehman said.

In neighbouring Clark County, where 625 square miles has been consumed, emergency management spokeswoman Allison Kuhns said: “Frankly, there is not much left to burn.” The state’s sole fire victim was a semitrailer driver who succumbed to smoke in the county Monday after his rig jackknifed.

Kansas crews also are monitoring what’s left of a fire near Hutchinson that destroyed nine homes and burned about 11 square miles, along with a Rooks County fire that is 97 per cent contained.

The weather could at last work in the firefighters’ favour: Winds across west and central Kansas and into the Oklahoma and Texas panhandles will range from 10 to 15 mph Thursday, down from earlier in the week, according to Jared Leighton, a National Weather Service meteorologist.

In the Texas Panhandle, fires have burned about 750 square miles, killing three ranch hands as they tried to save cattle and a man who was caught in smoke as he attempted to drive home from work. Two of the state’s three fires are fully contained, according to the Texas A&M Forest Service. The largest – which burned about 500 square miles in the northeast Panhandle near the Oklahoma border – was 75 per cent contained Thursday.

About 545 square miles also has burned in Oklahoma, where a woman had a deadly heart attack while trying to protect her farm. State forestry officials said Thursday that the three fires were 10 per cent contained and that crews were working to suppress hot spots.

No deaths were recorded in Colorado, where more than 45 square miles burned.

The fire North of Canadian I had to go around last night. Thousands of acres gone. Scorched earth as far as the eye can see. #TxFires pic.twitter.com/XyxjaPnHAA