This storm preparation tip is a myth

As Newfoundland gets hit by the remnants of Tropical Storm Gordon and Hurricane Florence threatens the Carolinas, brokers can make a difference in advising homeowners what not to do as nasty weather approaches.

“In Canada, there are not many hurricane-type storm events, however on the Atlantic coast and on the Pacific coast we do have the occasional hurricane- or cyclone-type direct hit,” Rocco Arbitrio, Toronto-based regional risk control specialist for Travelers Canada, said Tuesday.

Forecasters warned Tuesday that Hurricane Florence could product life-threatening storm surges on the coast of the Carolinas and Virginia. No warnings were issued for Canada, but The Canadian Press reported that tropical depression Gordon was expected to deliver up to 40 millimetres of rain to parts of New Brunswick, Nova Scotia and Newfoundland.

“Some homeowners think that taping an X on your window is something that would protect the window from being shattered by flying debris,” Arbitrio said in an interview. “That is purely a myth and not recommended. I don’t know how the myth started, but flying debris at 100 kilometres an hour is going to go through a window irrespective of an X taped on it. It will shatter on impact.” 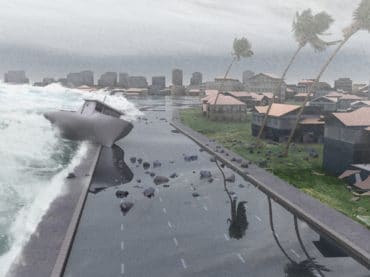 To prevent debris from hitting windows in the first place, homeowners need to think of what could hit their home if winds get severe.

When the eastern U.S. gets hit by a hurricane, Canada can be hit by the remnants, “which can possibly result in high wind storm damages or excessive rain and water accumulation that can cause flood or sewer backup,” Arbitrio said Tuesday in an interview.

Homeowners need to prepare for power outages. They should stock a survival kit to include non-perishable foods, medicine, water, flashlights and spare batteries, said Arbitrio.

“If you have storm shutters, they should be used. If not, and you are in an area that is prone to high windstorms, you should purchase marine plywood, which is an exterior grade plywood” with no knots or blemishes, which can be used to board up windows, he added.

Tropical Storm Gordon made landfall Sept. 4 near Pascagoula, Mississippi, with winds of 112 km/h, slightly below hurricane strength, The Associated Press reported earlier. The remnants of that storm was still producing rain Sept. 12 over Newfoundland.

In the event of a major storm, homeowners should be prepared for extended power outages, Arbitrio said. If you have a portable generator, do not use it indoors (due to the risk of carbon monoxide poisoning) and make sure you have enough fuel for it.

When Tropical Storm Chris appeared off the coast of North Carolina this past July, forecasters said at one point there was a 5% to 10% chance of the storm making landfall on Nova Scotia as a hurricane. That never happened.

But in 2016, Hurricane Matthew is estimated to have caused about $150 million in economic losses in Canada alone after causing more than 200 mm of rain in parts of Nova Scotia and Newfoundland.

1 Comment » for This storm preparation tip is a myth