The impact of Dorian on Canada’s P&C industry

“Business interruption is going to be huge on the commercial book of business,” said Kumar Sivakumaran, vice president of national operations at SCM’s ClaimsPro unit, in an interview Monday with Canadian Underwriter.

Dorian, which earlier killed dozens in the Bahamas, made landfall this past Saturday near Halifax. Winds reached nearly 150 km/h in the Halifax area, the Canadian Press reported. More than 119 km/h is considered hurricane force. 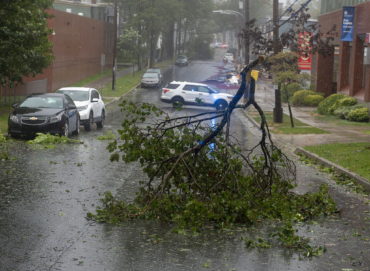 In the aftermath of Dorian, about 202,000 Nova Scotia Power customers had no electricity, the province’s emergency management office reported Monday morning. All public schools in the province were closed.

“When you have a massive power outage across the board, you are definitely going to have business interruption. That is definitely the biggest exposure that we are going to see from the commercial side of things, besides structural damage,” Sivakumaran said Monday.

It will be at least another three weeks before PCS can give an estimate of industry-wide losses in Canada from Dorian, said Johansmeyer. “Insurers need those couple of weeks to understand underlying event,” he said.

To show what adjusters go through after major storms, Johansmeyer cited by example Hurricane Sandy, which made landfall nearly six years ago about 200 km south of New York City. Johansmeyer saw the impact on Hoboken, N.J., across the Hudson River from the Big Apple.

“In the first week, adjusters couldn’t even get into town. After the first couple of days, the cops were letting non-residents drive in but the adjusters didn’t necessarily have access to enough fuel to get to Hoboken and then get home at the end of the day, especially if they had to sit for two hours to get into congested streets with a  bunch of other people coming in to check on their businesses or homes and so forth,” said Johansmeyer. “There are practical on-the-ground considerations that come with each cat that we have to keep in mind as part of this process.”

Johansmeyer could not say whether Dorian’s losses for Canadian insurers will be higher than 2003’s Hurricane Juan, which IBC estimated at the time cost the industry more than $85 million.

Hurricane Matthew was said to cause more than $100 million in 2016 in Canada, with Sydney, N.S. being among the most impacted communities.

So how does Dorian compared to Matthew?

“I would say this is a bit more significant [than Matthew],” Sivakumaran suggested Monday.

In the aftermath of Dorian, it will take retailers, restaurants and other businesses some time to get back up and running, said Sivakumaran. Business interruption losses will likely be long-tail claims.

At the moment, the insurance industry is focussed on more on personal lines claims down east because people need a place to live, Sivakumaran suggested.