Rev. Betsy Hogan, the minister at the historic St. Matthew’s United Church founded in 1749, said the damage is part of a worrying trend of powerful storms disrupting her church and the lives of some of the region’s poorest citizens.

Residents of an overnight shelter in the Barrington Street church’s basement heard the crash and alerted the building administrator in the middle of the night, she said. 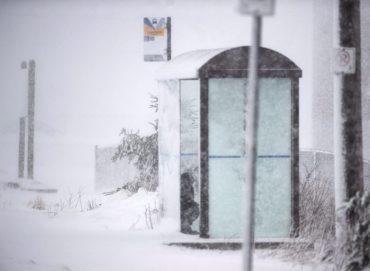 A bus shelter in Halifax where a low pressure system is bringing snow, rain, high winds and a possible storm surge to the region. Andrew Vaughan, The Canadian Press

The main steeple withstood the gusts, but one of the four smaller surrounding steeples had plunged to the ground, breaking part of a wrought iron fence that lined the sidewalk.

Hogan said she’s concerned by the frequency and intensity of harsh weather and storm surges battering the East Coast this winter, with the latest series of three storms occurring in less than a week.

“We’ve never had issues like this before,” she said in an interview.

“Something has changed that has resulted in not only higher winds and gusts of winds but also in the direction and the complexity of them. It must have to do with climate change.”

The church installed a new roof about two years ago, yet a wind storm in December was still able to rip sections of it off, said Hogan.

Elsewhere in Nova Scotia, about 51,000 homes and businesses had no power at daybreak Wednesday, though Nova Scotia Power’s crews were going through yet another set of repairs to restore the damaged infrastructure.

“When you have snow mixed with rain it makes the snow heavy, it clings to our equipment and weighs down tree branches,” she said.

In New Brunswick there were fewer power outages, with about 4,300 customers still without power as of 6:30 a.m., but schools throughout the province were closed due to the heavy snowfall that clogged roads.

Environment Canada had issued a slew of warnings, saying up to 25 centimetres of snow was expected in some areas.

Agency meteorologist Ian Hubbard said 20 to 25 centimetres of snow was expected in New Brunswick, with up to 40 centimetres possible in some areas.

Prince Edward Island had school closures along with one-hour delays as buses waited for roads to be cleared. Some primary care facilities in P.E.I.’s West Prince region also announced they were rescheduling appointments due to the storm.

Environment Canada had estimated there would be high winds of up to 110 kilometres an hour along coastal areas of Nova Scotia and up to 100 km/h in parts of Newfoundland.

The weather agency said some areas of Newfoundland could expect 15 to 30 millimetres of rain by Thursday afternoon.

Hogan said the recurring storms around the region are something that concerns her both “as a United Church minister, and as a human being,” citing the recent damage caused by storm surges along the province’s coast _ particularly the south shore _ last week.

“The storms are having much more impact on Nova Scotians’ lives,” she said.

The latest damage has meant an evacuation of the church building, which is the site of the Out of the Cold shelter _ which provides food and a place to sleep for citizens who often have nowhere else to go.

“People are being evacuated from their homes, even if their home is only a church basement,” said the minister, who has led worship at the church since 2012.