More tornadoes ahead as death toll reach 15 in southeast U.S. 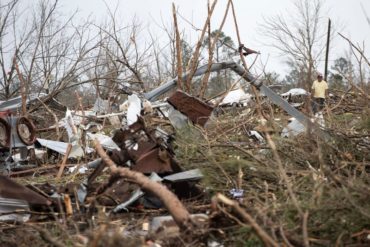 The National Weather Service said Sunday that southern Georgia, northern Florida and the corner of southeastern Alabama could face forceful tornadoes, damaging winds and large hail. Long track tornadoes, which plow on for miles, were also a real risk.

The weather service’s Storm Prediction Center warned on its website of a “dangerous outbreak of tornadoes” on Sunday afternoon and pressed for residents to prepare. Long track tornadoes, somewhat rare and capable of staying on the ground for 20 or more miles, were possible.

Our friends in #Albany have experienced a horrific storm & are in need of donations & volunteers. Call 229.483.6214 to help #AlbanyStrong pic.twitter.com/YWAzG5PU5N

Purvis estimated the park has about 40 mobile homes, and roughly half of them were destroyed. Photographs from Cook County posted by WSB-TV (http://2wsb.tv/2jPv8Ec) showed a large area strewn with twisted metal and broken wooden beams, with some mobile homes damaged but still standing.

Another four people died in the same region, including two people who died after their mobile home got struck by an apparent tornado in Brooks County, which moved the home roughly 100 yards.

“A tornado hit a mobile home, picked it up and put it in the middle of Highway 122,” Brooks County Coroner Michael Miller said. “I don’t know if it rolled or was lifted, but it blocked the entire highway.”

He said the storm struck in the middle of the night, at about 4 a.m. Sunday, and both people inside the home were pronounced dead at the scene.

Live reports all morning on @GoodDayAtlanta of the storm damage in Albany and Dougherty County #fox5atl pic.twitter.com/u6tVl9Y6PG

The last time that the prediction centre issued a high-risk weather outlook – where forecasters are very confident of a tornado outbreak – was in 2014. Sunday marked only the third time since 2000 that any part of Florida had been at a high-risk for severe weather, Marsh said.

“This is a pretty rare event in this location,” Marsh said Sunday. “Any time the SPC issues a high-risk, for me, it’s sobering. “We’re coming to work and there’s a strong likelihood that people’s lives will forever be changed. It’s very sobering.”

Russell Schneider, the director of the Storm Prediction Center, said although many longtime Gulf Coast residents understand that severe weather and tornadoes could strike any time of year, some new to the area might not immediately associate January with a tornado outbreak.

“We live in a very mobile society, we’re moving around the country all the time, I think people in the Gulf Coast unfortunately understand these tragedies (are possible),” Schneider said.

Albany, GA
Easy to tell the path of the storm by looking at these trees. #fox5storm pic.twitter.com/erCuEPSeH9

Bill Bunting, the chief of forecast operations at the centre, said meteorologists expect severe storms to again fire up in the Southeast and when they develop, the cells will move rapidly.

“There will be many severe storms covering a large area, and they will be moving so quick that you really need to heed the warnings, or it could be too late at that point,” Bunting said. “There will be a risk well after dark.”

January tornado outbreaks are rare but not unprecedented, particularly in the South. Data from the Storm Prediction Center shows that, over the past decade, the nation has seen an average 38 tornadoes in January, ranging from a high of 84 in 2008 to just four in 2014.

If the storm fatalities reported so far this year – four each in Alabama and Mississippi and the 11 in Georgia – are all attributed to twisters, this January’s death toll would be worse than 1999. That year, 18 people died in series of storms in Texas, Arkansas and Tennessee.

the entire southeast is covered in severe storms along with all of NC. The death toll had risen to 18, keep others in mind tonight!! pic.twitter.com/OKrOH8aP7N

Crazy photo of a tree twisted from Albany #tornado. pic.twitter.com/ZOF9TUYK9Q