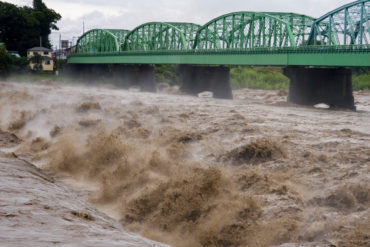 As of Monday morning, Typhoon Lionrock was about 570 kilometers south-southeast of Yokosuka, Japan, Impact Forecasting said in a cat alert.

Most of Japan is 14 hours ahead of the Eastern time zone.

“The presence of a deepening trough to the northwest of Lionrock is creating strong southwesterly flow, restricting the equatorward outflow channel of the typhoon,” Aon Benfield said, adding that the typhoon “is currently tracking northeastward along the northern periphery of a high pressure ridge located to the south.”

Aon Benfield says the weather system “is expected to continue to track northeastward under the influence of the aforementioned high pressure ridge while undergoing significant weakening in the next 24 to 36 hours as it tracks into cooler waters and upper level conditions continue to deteriorate.”

Previous typhoons during the past year included Melor, which affected the Philippines in December, 2015. In its Global Catastrophe Recap for December, Impact Forecasting reported that Melor caused economic damage – to agriculture and infrastructure alone – of about US$140 million.

At least 42 people died and an additional 24 were injured as a result of Typhoon Melor, Impact Forecasting said at the time.

The United States National Oceanic and Atmospheric Administration recently said there is a 70% chance of 12 to 17 named storms in this year’s Atlantic hurricane season. Forecasters say five to eight of those named storms are expected to become hurricanes, NOAA said at the time.

In June, Hurricane Colin was downgraded to tropical storm status when it made landfall in northeastern Florida Weather.com reported earlier. It knocked down trees and caused flooding in Florida, Weather.com reported, adding that one area south of Gainsville got nearly 11 inches of rain in 24 hours.