ST. LOUIS – River levels are falling Thursday after record and near-record flooding in parts of the Midwest, but the crisis is far from over. Officials have not said when hundreds of residents displaced from flooded properties in suburban St. Louis will be allowed to return home, but they have warned of the dangers that await them. 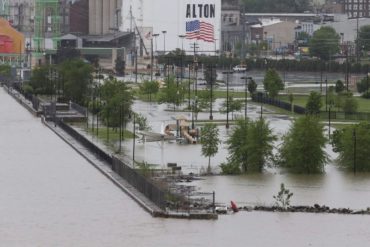 Downpours that dumped up to a foot of rain in parts of the nation’s midsection last weekend led to the sudden surge of water. Flooding is blamed in at least nine deaths, and an 18-month-old Arkansas girl swept away by floodwater is missing and presumed dead. Hundreds of homes and businesses were damaged in Oklahoma, Missouri, Arkansas and Illinois, and the Wabash River in Indiana was flooding at Terre Haute, Vincennes and other places.

The Midwest wasn’t alone. Up to 8 inches of rain fell Wednesday in parts of Louisiana, leading to flash flooding. A school bus trying to drive on a flooded road got stuck and nearly tipped over near the town of Iowa, Louisiana. Students and the driver were rescued and no one was hurt.

A steady rain that began Wednesday continued Thursday over middle America. The National Weather Service said the additional water – up to 4 inches of rain in some areas – shouldn’t cause rivers to rise higher, but will prolong the flood.

City officials in tiny West Alton, Missouri, about 20 miles north of St. Louis, urged residents to get out of town amid concerns the Missouri River levee there could break.

The worst of the damage was along smaller rivers.

The Black River that runs from southeast Missouri into northeast Arkansas was down after cresting at record levels earlier this week in places such as Poplar Bluff, Missouri, and Pocahontas, Arkansas. But the mess left behind was substantial. More than 100 members of the Arkansas National Guard are assisting with the flood-fighting effort. Gov. Asa Hutchinson said 25 guard vehicles are prepared for high-water rescues as needed in an area where at least nine levee breaches have been reported.

The Meramec River in suburban St. Louis also is on the decline. A levee at Valley Park, Missouri, was holding, as is a sandbag levee consisting of 250,000 bags in nearby Eureka. But the river remains dangerously high, and St. Louis County Police Chief Jon Belmar urged patience for evacuated residents anxious to get back home.

Traffic is closed on the Mississippi River. The U.S. Coast Guard late Tuesday closed a 14.5-mile stretch of the river near St. Louis, blocking a vital passageway for moving agricultural goods and other products.

Good news Hwy 109 is open to Manchester. Did u hear me 109 is open!!! #Missouriflood @ksdknews pic.twitter.com/FWIVHeGbJR