The number of Barrie, Ont. clients whose homes are damaged beyond repair by Thursday’s tornado may be more than initially reported, an industry expert predicted Friday.

The tornado touched down at about 2:30 p.m. July 15, the Canadian Press reported. Though it’s too early to quantify the industry-wide insured loss, experts told Canadian Underwriter Friday that it is a natural catastrophe event for sure, with a mixture of property and auto damage claims in Barrie, on the shore of Lake Simcoe about 100 kilometres north of Toronto.

But a forensic team affiliated with the Institute for Catastrophic Loss Reduction is guessing there are “considerably more” than 25 homes in Barrie with damage so severe that they cannot be saved, ICLR managing director Glenn McGillivray suggested Friday morning in an interview with Canadian Underwriter.

“When you see a complete roof loss, the home is a write-off,” said McGillivray.

McGillivray is certain the July 15 Barrie tornado is a catastrophe, meaning it will cause more than $25 million in industry-wide insured losses. It is normally takes weeks for catastrophe modelling firms publish estimates of industry-wide losses.

As of the morning after the tornado event, it was too early to tell how much insurers will pay out on claims, Crawford & Company (Canada) Inc. chief operating officer Greg Smith told Canadian Underwriter. 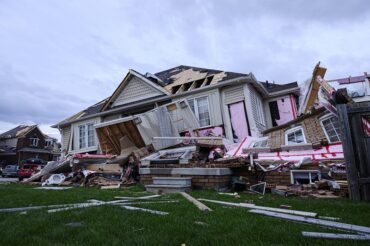 Damage left after a tornado touched down in a neighbourhood in Barrie, Ont., on Thursday, July 15, 2021. THE CANADIAN PRESS/Christopher Katsarov

“Property damage typically produces the most damage by dollar value because of the cost to rebuild or repair damages. However, there are a large number of auto claims being reported for damages like broken windows and damaged paint that are less expensive to repair,” Smith said of the Barrie disaster.

McGillivray believes the July 15 tornado will not be as costly as the 1985 tornado that hit Barrie but will be more costly than the June 2014 tornado that hit the community of Angus, about 20 kilometres west of Barrie. Property Claims Services reported that tornado cost the industry about $30 million.

As of the morning of July 16, the forensic team affiliated with ICLR did not have an exact count, of the number of homes destroyed, because the team had only arrived in Barrie the evening of July 15, said McGillivray. The ICLR-affiliated team is from London, Ont.-based Western University, whose civil engineering department has a long-standing affiliation with ICLR.

The members of that forensic team are trying to figure out how the homes were so badly damaged and whether there were any deficiencies in the construction work or building code violations, said McGillivray.

Environment Canada has given the July 15 Barrie tornado a preliminary rating of 2 on the Enhanced Fujita scale, meaning it had maximum wind speeds of 210 kilometres per hour, CP reports.

“There is nothing abnormal about this tornado. We get about 80 tornadoes a year in Canada that we know of. I think there are a lot more that we don’t know of,” McGillivray told Canadian Underwriter Friday.

The Enhanced Fujita scale has been used since 2013 while the Fujita scale was used before that. EF0 tornadoes have wind speeds of 90 to 130 kilometres per hour while the strongest, EF5, have speeds of more than 315 km/h. Canada has had only one EF5 tornado ever, in 2007 near Elie, Manitoba.

With the July 15, 2021 Barrie twister, the damage path was about five kilometres long and up to 100 metres wide, CP reported.

“Tornados tend to do the most damage along a narrow track, as was the case here where some homes on the same street are destroyed whereas neighboring homes have cosmetic damage only.  The storm that produced the tornado was significant and extended into other areas including Keswick and the Kawarthas as the systems passed through the province,” Smith told Canadian Underwriter.

The 2021 Barrie tornado is not reported to have caused any deaths as of July 16. CP reported eight people were taken to hospital.

The 1985 tornado reportedly killed 12 in and near Barrie.

More News
Related
Property claim cycle times are on the rise: Xactware data
How COVID-19 has affected repair of vehicles from hail
What’s making it harder to estimate property Cat claims
How this reinsurer views property risk in Fort McMurray