SOUTHEND , Sask.  – Residents who had to leave their remote community in northern Saskatchewan because of a wildfire are being allowed to return.

The wildfire was growing last week and was 13 kilometres away when an evacuation was ordered for people living in Southend, about 600 kilometres northeast of Saskatoon.

A wildfire operations spokesman says the fire has not grown and the edges nearest to Southend and the one major road into the community are contained.

But they’re not all going home – those with health conditions will stay behind until it’s safe for them to return. 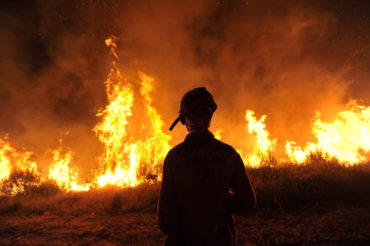 There is no firm number as to how many people are heading back and how many must wait.

Smoke from the blaze and the lack of fire breaks such as roads, rivers or lakes prompted the evacuation June 19.

“We are going to be working with government relations and the community to supply some cots … so they are able to set up a clean-air shelter (in case there are ) smoke conditions,” Valentine said Tuesday.

Another fire Tuesday at Cameco’s McArthur uranium mine in northern Saskatchewan covered about 80 square kilometres. The Environment Ministry was working with the company and management.

Scott Wasylenchuk, the ministry’s director of wildfire operations, said the area had had rain, so he was expecting progress on getting the flames under control over the next few days.

The two fires were among more than 50 burning in Saskatchewan.

There have been more than 300 wildfires in the province so far this year. The five-year average is 232.

More News
Related
Out of control Saskatchewan wildfire triggers state of emergency, evacuation
Wildfires force more people out of their homes in northern Alberta
Officials warning B.C. flooding this year may be worse due to 2017 wildfires
Military help in Pikangikum First Nation being ‘drawn down’ as wildfire slows