Will Ottawa-Gatineau insured losses set a record for tornado damage?

Official catastrophe estimates will not be ready for awhile following the tornadoes that struck the Ottawa and Gatineau areas Sept. 21, but it will definitely be a cat event, industry observers say.

Catastrophe Indices and Quantification Inc. (CatIQ) defines a catastrophe as an event causing more than $25 million in insured property damage. 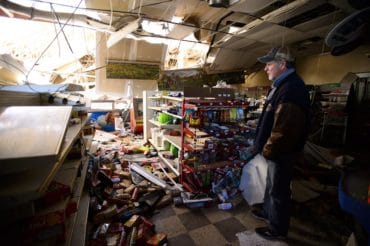 Mike Fines who is part owner of Dunrobin Meets and Deli surveys the damage to the store caused by a tornado in Dunrobin, Ont., west of Ottawa, on Monday, Sept. 24, 2018. The tornado that hit the area was on Friday, Sept, 21. THE CANADIAN PRESS/Sean Kilpatrick

Glenn McGillivray, managing director of the Institute for Catastrophic Loss Reduction (ICLR), told Canadian Underwriter Monday that “if history proves to hold true, insured damage for this event will not be as high as scenes of the damage may imply.”

For example, a June 2014 tornado in Angus, Ont. caused extensive damage, but insured losses totaled about $48 million. Before that, an August 2011 event in Goderich, Ont. caused about $110 million.

Pete Karageorgos, director of consumer and industry relations for the Insurance Bureau of Canada, was in Angus, Goderich, and now Ottawa, to witness the damage for all three tornado events. He told Canadian Underwriter Friday it will likely be several weeks or a month before an official estimate is available.

Speaking personally, Karageorgos gave his sense of the tragedy he witnessed in Ottawa. “Based on some of the damage I’ve seen, in the hardest hit areas of all three, I could say Angus comes in third spot, Goderich comes in second spot and [the Ottawa-Gatineau tornadoes]… will likely surpass Goderich in terms of the amount of damage.”

Impact Forecasting reported that three tornadoes – rated EF-3, EF-2 and EF-1 on the Enhanced Fujita scale – all touched down in the Ottawa-Gatineau area, causing considerable property damage in Dunrobin. At the peak of the severe weather outbreak, more than 400,000 consumers lost electricity, as damaging winds and hail downed trees and powerlines.

The most powerful of the tornadoes, an EF-3 tornado with winds of up to 265 kilometres per hour, touched down near Kinburn, Ont., west of Dunrobin. “This is the first EF-3 tornado to occur in Canada during the month of September in at least 100 years,” Impact Forecasting reported.

McGillivray said the last F-3 tornado to touch down in Ontario in September was in 1898 in Merritton (now known as St. Catharines).